(NaturalHealth365) A 2016 study published in Scientific Reports of Nature magazine has revealed major differences between GMO corn and its natural, non-GMO counterpart. These findings call into question the safety of genetically modified organisms in terms of human health and safety both near- and long-term.

The peer-reviewed study conducted at King’s College in England used molecular profiles to assess the composition of GMO and non-GMO corn. In particular, the effects of genetic engineering to make a type of Roundup weed killer-resistant corn called “NK603” was studied.

The genetically modified organisms showed a marked increase in the polyamines cadaverine and putrescine, potentially toxic substances that can heighten histamine (allergic) reactions. Both compounds have also been linked with the formation of carcinogenic nitrosamines.

The researchers found clear, profound compositional differences in the GMO corn, showing that it’s not anywhere near equivalent on a molecular level to non GMO varieties. A total of 91 small molecule biochemicals (metabolites) and 117 proteins were found to be altered in the NK603 corn. These alterations were caused largely by an imbalance in energy utilization as well as oxidative stress damage within the cells.

In the U.S., a very general assessment of molecular composition is in use by regulatory agencies assessing the safety of GMO foods and crops. If the content of nutrients is found to be in a similar range as non GMO versions, the food is dubbed “substantially equivalent.” However, studies have shown eating these foods may not be safe. Rats fed GMO corn have shown higher incidence of kidney and liver damage over two years of consumption compared with control subjects.

The 2016 British study of Roundup-resistant GMO corn went much deeper into the compositional analysis of this frankenfood than the comparatively crude tests used in the U.S. For example, GMO crops are tested for total protein content here, but the more important measure is looking at the profiles of specific types of proteins, as the British study did.

The results of this study fly in the face of claims of the GMO industry and regulatory agencies. These organizations say that GMO corn is “substantially equivalent” to non GMO corn and safe to consume. Researchers are now calling for a more thorough evaluation of NK603 GMO corn and the results of consumption to health and human genetics over time. 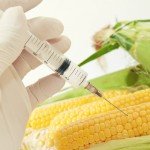 (NaturalHealth365)  Genetically modified mosquitoes were recently released in the United States.  Anyone END_OF_DOCUMENT_TOKEN_TO_BE_REPLACED

(NaturalHealth365)  Sure, we know that most conventionally produced meat isn’t the healthiest END_OF_DOCUMENT_TOKEN_TO_BE_REPLACED

Gene-edited tomato promoted as therapeutic, but is it even safe?