Protect your vision with goji berries 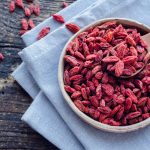 (NaturalHealth365)  Age-related macular degeneration, or AMD – characterized by deterioration of the light-sensing macula in the eye’s retina – is the leading cause of blindness in Americans over age 65.  According to the Bright Focus Foundation for Macular Degeneration Research, AMD currently affects over 11 million people in the United States, a number that is likely to increase with the ongoing “graying” of America.

Goji berries (botanically known as Lyceum barbarum) have been used to promote visual health in Traditional Chinese Medicine, where they are revered as “eye brighteners.” Now, a new study from the University of California, Davis, supports this traditional claim – and shows that compounds in these tiny crimson berries promote macular pigment density (MPD).  Learn why MPD is such a “big deal” when protecting and preserving vision – and why scientists are so intrigued by the potential of goji berries against macular degeneration.

Goji berries are “sunscreen for the eyes,” scientists claim

As it turns out, goji berries are extremely rich in lutein and zeaxanthin, a pair of natural plant pigments (or carotenoids).  Lutein and zeaxanthin are concentrated in the retina cells, where they provide oxidant defense – meaning that they can protect against damage from harmful free radicals.  In addition, lutein and zeaxanthin help to filter and absorb “blue” light emitted from smartphones, laptop screens, and TVs.  (Let’s be honest – all too many of us experience substantial daily exposure to this potentially damaging light!)

The new study, published last month in Nutrients, involved healthy adults aged 45 to 65.  Five times a week, participants received either 28 grams a day of goji berries (about a handful) or a commercial supplement containing 6 ml of lutein and 4 ml of zeaxanthin.  After 90 days, the goji berry group displayed significant improvements in macular pigment density and higher levels of beneficial carotenoids in the skin.  Study leader Xiang Li, a doctoral candidate in the Nutritional Biology Program at UC Davis, likened goji berries to “sunscreen for the eyes.” “The higher the lutein and zeaxanthin in your retina, the more protection you have,” Li added.

The team concluded that healthy middle-aged individuals’ regular intake of goji berries might protect vision.  “The next step for our research will be to examine goji berries in patients with early-stage AMD,” said study author Glenn Yiu, an associate professor in the Department of Ophthalmology and Vision Sciences.

Prof. Yiu noted that goji berries improved the macular pigment density of healthy participants “beyond” the power of nutritional supplements.  And while the goji berry group had increases in lutein and zeaxanthin levels in the macular pigment and skin, the commercial supplement group showed no change in levels.  (The scientists pointed out that the carotenoids in goji berries are in a highly bioavailable form, which presumably could account for the superior results of the berries).

By the way, this is not the only human study showing benefits from goji berries.  A separate study published in Optometry found that seniors who drank goji berry juice for 90 days significantly increased their levels of zeaxanthin and other antioxidants.

AMD can jeopardize the ability to perform everyday tasks

AMD’s classic symptoms include blurriness of central vision, colors appearing faded or washed out, and distortions in vision, such as straight lines appearing curved.  While peripheral vision may be left unaffected, AMD can still impair your ability to read, write, drive, or recognize familiar faces.  Being over age 60 raises your risk of AMD, as does smoking.

In fact, experts report that smokers have four times the risk of developing AMD as non-smokers!  Finally, nutrition, sun exposure, and genetics can play a role.  (Important: While there are no early symptoms of AMD, it can be detected during a comprehensive eye exam.  Scheduling a regular check-up with your ophthalmologist is a wise move.)

You can enjoy goji berries fresh or dried.  The dried berries have an appealing, raisin-like taste, while fresh berries are reminiscent of tart cranberries.  You can also access their benefits in the form of juices and teas.  In addition, goji berries are available in supplement form.  Naturally, check first with your integrative doctor before supplementing.

By the way, goji berries promote more than eye health.  They are also believed to support restful sleep, promote healthy weight, enhance athletic performance, boost the immune system and elevate mood.  In an early trial published in the Journal of Alternative and Complementary Medicine, volunteers drank 120 ml of goji berry juice a day for two weeks.  At the study’s end, they reported improved energy and athletic performance, sharper focus, and feelings of contentedness and calm.

Goji berries may be tiny – but when it comes to health benefits, they pack an outsize “punch.” And, they just may help you see a brighter future.