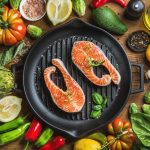 (NaturalHealth365)  If you sometimes feel as if you’re losing brain cells on a daily basis, you’re probably right.  And, it’s not just you.  The fact is: our brains naturally shrink with age – a process known as brain atrophy.  The bad news is that the loss of brain cells begins in our 30s and 40s, with the brain shrinking by 5 percent each decade after age 40.  The even worse news is: after age 60, the process accelerates.

The good news (and there is some good news!) is that research has suggested that following a Mediterranean diet may slow age-related atrophy.  A study conducted by investigators at Ben-Gurion and Harvard Universities helps to confirm this theory – but with a twist.  The researchers found that a “green” Mediterranean diet slowed brain aging even more effectively than the basic version of the diet.  But, what is a green Mediterranean diet, and how does it promote brain health and cognition?

The 18-month trial, which involved 284 participants and was published in the American Journal of Clinical Nutrition, has been touted as one of the largest brain MRI trials conducted to date.  Participants – all between 31 and 82 years old, with excessive abdominal fat and/or unhealthy levels of fats in the blood – were randomly divided into three groups.

One was given a standard “healthy” diet, while a second group was given a Mediterranean diet enhanced with an ounce a day of walnuts.  The third group was also given a walnut-enriched Mediterranean diet, further enhanced with three to four cups of green tea a day and a daily “green” shake of Mankai duckweed.  In addition, all three groups participated in aerobic exercise programs.

Before and after the trial, researchers used brain MRIs to record hippocampal occupancy and lateral ventricle volume measurements to assess degrees of brain atrophy and even predict the odds of dementia in the future.

The scientists found that participants given the “green” Mediterranean diet experienced less age-related brain atrophy than those who consumed the basic Mediterranean diet and those who ate a standard “healthy guidelines” diet.  This improvement was most pronounced in individuals over age 50.

In fact, the more duckweed, green tea, and walnuts that were consumed – and the less processed meat! – the less decline there was in the volume of the hippocampus.  According to study co-leader Prof. Iris Shai, antioxidant polyphenols in plant-based foods can reduce inflammation in the brain and even encourage the growth of new neurons or brain cells.

Even without green polyphenols, the Mediterranean diet is a healthy way of eating.  The classic diet features generous amounts of nutrient-rich fruits, vegetables, and legumes; healthy monounsaturated fats found in nuts, seeds, and olive oil; whole grains; modest amounts of dairy products and limited amounts of fish, poultry, and beef.  The diet also includes antioxidant spices such as rosemary, basil, and oregano – along with modest quantities of resveratrol-rich red wine with dinner.  Processed foods, refined sugars, trans fats, and “simple” carbs are eaten rarely, if at all.

Scientists and nutritionists alike have long believed that the Mediterranean diet can support heart health, promote healthy blood sugar levels and inhibit cognitive decline.  And studies appear to back this up.

In an influential trial of 7,000 participants published in the New England Journal of Medicine, adherence to the Mediterranean diet lowered the risk of heart disease by an impressive 30 percent.  And in a review published in Frontiers of Nutrition, the researchers cited “encouraging evidence” that higher adherence to the Mediterranean diet was associated with slowing cognitive decline and reducing its progression to Alzheimer’s disease.

With the addition of plant-based green foods, this already-healthy diet appears to take on even more powerful health-sustaining properties.

Healthy lifestyle choices and appropriate supplementation may help diminish the speed of brain shrinkage and maintain cognitive health.  In one promising study, 70-year-old participants with mild cognitive impairment were given high-dose vitamin B supplements daily for two years.  The vitamin group, which received folic acid (vitamin B9), vitamin B6, and vitamin B12, significantly decreased their levels of an inflammatory marker known as homocysteine – and reduced their brain shrinkage rate by a striking 30 percent when compared to the placebo group.  Naturally, check with your integrative doctor before supplementing.

Regular exercise may also help protect the brain from age-based declines.  A study conducted by Boston University School of Medicine found that people with poor physical fitness in their 40s had substantially lower brain volumes by age 60 than people who stayed physically active.  (In other words, “Move it or lose it” is wise advice).

Other steps you can take to slow brain atrophy include quitting smoking, reducing alcohol intake, and controlling blood pressure and blood sugar levels.

While nobody escapes a certain amount of age-related brain shrinkage, the latest study shows that nutritional choices may make a real difference when it comes to promoting brain and cognitive health.  In the researchers’ words, adherence to a “green” Mediterranean diet is a “simple, safe and promising avenue to slow age-related neurodegeneration.”