Green Passport: Total medical tyranny is no longer a threat, it is a reality 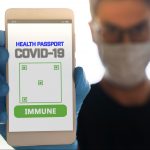 (NaturalHealth365) If the thought of being required to get injected by an experimental and unapproved drug in order to travel out of the country or even travel around your own community sounds farfetched to you, then be warned: the stage is already being set.  Indeed, tech companies and government officials are already making this troubling dystopian development – the so-called “green passport” – a reality.

Critics, including the American Civil Liberties Union (ACLU), say that mandating a COVID shot or requiring proof of a COVID recovery in order to work or travel completely steamrolls health freedom and creates a system of inequity.  But is it too late to stop the madness?

Listen carefully to this video – cry for help – below:

Airlines, Big Tech, and government officials scramble to normalize the green passport – with their heads in the sand about inequity and health freedom violations

As frightening as the issue of such a passport sounds, it’s not a black and white matter.  Indeed, the precedent of pre-travel vaccinations has already been set in some countries, such as those in North and West Africa, where certain immunizations are recommended or in some cases required prior to entry and have been for decades.

However, many people are understandably concerned over the speed with which tech companies, airlines, and government officials are trying to create and normalize the idea of “certificates” or “passports” that prove immunization against or prior infection with COVID-19.  Here are a few reasons why:

Lastly, we would be remiss not to point out: the current COVID-19 injections are unapproved by the FDA and lack long-term safety data.

Again, precedences have already been set – e.g., mandated childhood immunization for public school enrollment and for travel to select countries.  But the question is, where does the control end?  How far are we willing to go when it comes to allowing governments to restrict our basic freedoms?

Beyond concerns of inequity and restriction of civil rights, green passports or certificates could also pose THIS serious threat

Concerns about social inequity, medical autonomy, and civil liberties are deeply troubling enough.  But many critics also point out that the idea of digital passports poses a huge security threat.  Will passports be sold on the dark web?  Will protected health information be at risk for a data breach?  Even if digital passport companies like IBM tout the use of blockchain technology and decentralization to store data, how can the public feel more assured that their sensitive information is safe?

Many critics say that not enough people are asking these questions, and that government and tech officials are trying to brush these completely reasonable discussions under the rug.  Meanwhile, protestors in Israel and the U.K. are signing petitions and making their voices heard loud and clear.  If you want to stand up to the notion of green passports, too, be sure to contact the ACLU or your local representatives with your concerns.

Sources for this article include:
Passporthealthusa.com
USAtoday.com
APNews.com
BBC.com
ACLU.org

(NaturalHealth365)  The Wall Street Journal (WSJ), an organization that reports the news, END_OF_DOCUMENT_TOKEN_TO_BE_REPLACED