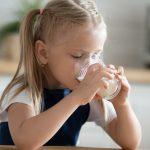 (NaturalHealth365) Iron deficiency anemia: this condition, which affects about 5 million Americans, develops when there isn’t enough oxygen-carrying red blood cells in the body due to a lack of iron intake and/or absorption. Additional estimates show that 10 million Americans have at least some level of deficiency of this crucial mineral involved in growth and development.

Sadly, the decades-long push by the dairy lobby to drink cow’s milk because it’s apparently “good for growing bones” could be partly to blame for the incidence of iron deficiency, especially in infants and young children. And if you’ve ever asked yourself the question, “Is dairy good?,” this surprising correlation may give you a new perspective.

It might surprise you to know that drinking cow’s milk has been associated in scientific literature as a possible risk factor for iron deficiency. As explained in one 2011 paper from Nutrition Reviews, there are a few possible explanations for this unexpected finding:

Interestingly, increased cow’s milk consumption early in childhood has also been proposed as a possible risk factor for obesity later in life.

Does a child in your life suffer from iron deficiency anemia? Here are 5 warning signs all parents of young kids should know

Overall, the possible complications of iron deficiency anemia in children is enough to have many parents re-think the need to give their children dairy products. Potential complications include heart problems (e.g., rapid heartbeat), growth problems, impaired brain function, and increased vulnerability to infections.

Here are five key warning signs of iron deficiency anemia to look out for in any child, and especially a child who eats dairy:

Rarely, severe cases of iron deficiency anemia can also lead to an unusual condition called pica, in which children crave and eat non-food items like chalk, ice, and dirt.

Bottom line: It could be time to chat with your pediatrician and rethink your decision to feed your child dairy products, including cow’s milk. Also, be sure to give your child plenty of iron-rich foods as well as foods rich in vitamin C (e.g., broccoli, grapefruit, oranges, and strawberries) since this nutrient enhances iron absorption.

(NaturalHealth365)  Every 34 seconds in the United States, somebody dies of heart END_OF_DOCUMENT_TOKEN_TO_BE_REPLACED

(NaturalHealth365) You’ve probably heard that too much sugar harms your health.  Sugar END_OF_DOCUMENT_TOKEN_TO_BE_REPLACED