How milk thistle protects your liver from toxic chemicals 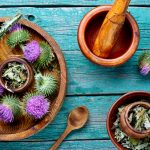 (NaturalHealth365) According to a 2005 report issued by the Department of Health and Human Services, the U.S. Centers for Disease Control and Prevention (CDC) screened over 2,500 Americans for 148 industrial chemicals – and found significant amounts of these chemicals in the blood of every person tested.  Not some people – every body!  Which is why today’s news about milk thistle is so important.

Studies show that milk thistle, an herbal remedy used since antiquity to treat liver disease, can offer significant protection against this modern-day plague of environmental toxins.

Milk thistle is also being used to address drug- and alcohol-related liver disease, viral hepatitis and another serious 21st-century problem: nonalcoholic fatty liver disease (NAFLD).  Keep in mind, NAFLD, which is reaching epidemic proportions in the United States, currently affects 80 million Americans – and is the most common liver condition in children.

Key point: The liver is the most important detoxifying organ in the body

The liver’s functions include regulating blood sugar and hormones, storing nutrients and producing bile, cholesterol and red blood cell components.  But its most vital tasks may be the isolation and neutralization of toxins – which are then transported for elimination via the bowels.

When the liver can’t effectively neutralize and dispose of toxins, they can accumulate in the liver and in body fat, or circulate in the bloodstream – ultimately ending up in bones, lymph or brain.

The liver also contributes to detoxification by promoting the production of glutathione, the body’s ‘master’ antioxidant.  Although every living cell in the body is bathed with glutathione, the liver contains more of this disease-fighting substance than any other organ or tissue in the body.

However, the body’s stores of glutathione are not unlimited. If glutathione in the liver is completely overwhelmed – as occurs in an overdose of a toxic substance such as acetaminophen – liver failure (and possibly, death) can result.

In fact, acetaminophen overdose is currently the number one cause of liver failure in the United States.

How milk thistle LOWERS the risk of liver disease

These properties give it useful applications in fighting liver disease. For example, disease-fighting effects include blocking oxidative stress induced by viruses and lowering liver enzymes in cases of viral hepatitis.

In a systematic review published in 2001 in Drugs, the authors reported that silymarin scavenged free radicals while inhibiting the pro-inflammatory 5-LOX pathway – and that it accomplished this safely, with only rare side effects.

Over 900 different prescription and over-the-counter drugs have been associated with liver damage. And, according to the U.S. Environmental Protection Agency (EPA), the average American contains up to 700 industrial chemicals in his or her body – a stunning statistic.

This is where milk thistle, botanically known as Silybum marianum, can come to the rescue.

Dioscorides – the ancient Greece legendary physician – famously advised the herb as a treatment for snakebite.

Almost two thousand years later, his recommendation still holds up. Recent studies have shown that silymarin prevents the binding of toxins to cell membrane receptors – making it effective against a variety of carcinogens and biological toxins.

In a review published in Phytotherapy Research, silymarin and silibinin (a type of silymarin) were found to protect against ethanol (the type of alcohol found in liquor, wine and beer), medications, carbon tetrachloride and other solvents, pesticides, heavy metals, radiation and poisonous mushrooms.

In an animal study published in 2009 in the International Journal of Biological Sciences, researchers found that a combination of garlic extract and silymarin helped reverse the harmful effects of NDEA, an environmental carcinogen.

The team reported that the garlic and milk thistle acted synergistically to significantly reduce liver toxicity – which it did by lowering elevated liver enzymes, replenishing glutathione and increasing levels of the natural antioxidant superoxide dismutase.

One of the most eye-opening studies involved 452 patients with poisoning from mushrooms. A group treated with silibinin experienced half the mortality rate (9.8 percent) as the conventionally-treated group (18.3 percent).

Finally, silymarin has been shown to significantly reduce liver-related mortality in patients with alcoholic liver damage.

In addition to protecting against drugs and chemicals, silymarin helps to alleviate damage from excess calories and carbohydrates.

With the ability to actually stop fat from lodging in the liver, milk thistle extracts have been acknowledged in several studies as an inexpensive, non-toxic adjunct treatment for nonalcoholic fatty liver disease.

NAFLD, the presence of excess fat in the liver of patients with no history of alcohol abuse, can develop into nonalcoholic steatohepatitis, or NASH, which in turn can lead to liver cancer, liver failure and death.

Natural health experts advise using a formulation standardized to 70 to 80 percent silymarin. Of course, always opt for a product from a reputable company.

Before supplementing with milk thistle, first get the go-ahead from your integrative physician.  And, if you are allergic to any member of the aster family – such as ragweed, chrysanthemums or marigolds – don’t use milk thistle.

Bottom line: The daily barrage of environmental toxins to which we are exposed presents an ever-present threat to health – but it is one that milk thistle can help to protect against. This amazing herb just might turn out to be the best friend your liver ever had.

Even small amounts of alcohol a day may damage brain health, study finds

(NaturalHealth365)  It has long been known that heavy drinking harms the brain.  END_OF_DOCUMENT_TOKEN_TO_BE_REPLACED