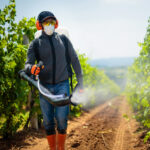 (NaturalHealth365)  It’s no secret that many harmful chemicals exist in our environment today.  Unfortunately, toxic chemicals even permeate our food and water supply.

In fact, recent tests conducted by the Food and Drug Administration (FDA) reveal that a shocking amount of foods in the United States are contaminated with pesticides.  So what does this mean for your health, and what can you do about it?

How many foods are tainted with pesticides?

The FDA tested 2,078 domestic fruit, vegetable, and grain samples as part of its annual testing process.  Sadly, the majority of these foods had pesticide residue on them.  The FDA report concluded that 59% of foods in the U.S. contain pesticides.  These chemicals were present on 77% of fruits, 60% of vegetables, and 53% of grains.

Many farmers routinely use pesticides, fungicides, herbicides, and insecticides on their fields and crops.  So it’s not surprising that these chemical residues end up in our food and water.

The disturbing potential effects of pesticides

If these chemicals are so common, why is it concerning that most U.S. foods are tainted with them?  For one, they can be harmful to your health.  For example, one of the herbicides most frequently found in animal foods is glyphosate – a weed-killing chemical labeled a likely human carcinogen.

There’s also some evidence to suggest that pesticide-related chemicals might increase the risk of celiac disease.  These unwanted chemicals are linked to several other disturbing health effects as well.  For example, scientific research indicates a connection between pesticides and Parkinson’s disease, diabetes, neurodevelopmental issues, and heart disease.

How much is too much?

This all begs the question, is there a threshold for dangerous amounts of pesticide exposure?

The FDA’s report on the food samples concluded that the food supply generally complies with the Environmental Protection Agency (EPA) pesticide limits.  However, many experts have concerns over what’s considered an acceptable exposure level.

In fact, the EPA has increased legal pesticide limits over the years – following requests from chemical manufacturers.  Furthermore, the EPA has not included a margin of safety for infants and children, who could be more vulnerable to toxic chemical exposure.

Whatever the case, it’s clear that toxic chemicals on vegetables, fruits, and grains are hard to eliminate.  And given the potentially detrimental health effects of long-term repeated pesticides in food, it’s hard to say how much, if any, is safe to consume.

How to minimize pesticide intake in your diet

No one may be able to completely avoid harmful pesticides and other chemicals in their daily lives.  However, you can take steps to consume as little of these substances as possible.  For one, buy organic produce or grow your own organic food.  Another option is to purchase your food from a local, organic farmer.  Even if the farmer isn’t “certified” organic (because it’s expensive to go through the certification process) … locally grown, organic food is much healthier than non-organic produce.

Of course, aiming for a wide variety of organic foods in your diet will reduce how much you get of any one chemical.  Unfortunately, even organic food could be tainted with some chemical residue.  We can’t stress enough the importance of knowing the source of your food.  Making better decisions about the quality of your food can make a huge difference in your health.

(NaturalHealth365)  In the latest episode of the environmental toxins saga, newly-published research END_OF_DOCUMENT_TOKEN_TO_BE_REPLACED