Are mushrooms the ultimate superfood? The answer may surprise you … especially when it comes to getting enough vitamin D 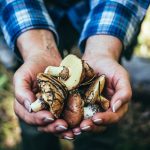 (NaturalHealth365) While certain types of mushrooms can be toxic or even deadly, the mushrooms you’ll find in the grocery store are safe and healthy to eat.  In fact, the health benefits of mushrooms appear to impact everything from cognition to gut health.

Mushrooms are even known as one of the few plant sources of vitamin D, a critical nutrient that about 1 billion people worldwide are estimated to be deficient in.  In other words: these versatile fungi could be a great addition to your weekly meal plan if you don’t eat them yet.

Most varieties of mushrooms contain a range of nutrients, including vitamin D, vitamin B, copper, potassium, selenium, and phosphorus.  We’re still learning about why they boost health, but human studies have so far revealed some promising effects.

According to Harvard Medical School, one 2019 study found that consuming just two servings of mushrooms per week (1 serving is about 3/4 cup cooked) was associated with a reduced risk of mild cognitive impairment in older adults compared to eating fewer than 1 serving per week.  Scientists attribute their excellent brain-protective benefits to their antioxidant capacity.

Another great thing about mushrooms is that you generally have a wide variety to choose!  Popular types of mushrooms include:

Read this important note about mushrooms as a vitamin D source

We mentioned earlier that mushrooms are one of the only plant sources of vitamin D, which (in addition to sunshine) makes them a popular choice for vegans or anyone interested in non-animal sources of this important vitamin.  And while this is true, there are a few important things to keep in mind so you can ensure you’re getting the most out of this nutritious fungi:

Before you eat mushrooms … here are two final tips:

Don’t wash or clean mushrooms until you’re prepared to use them (ideally within a week of purchasing), and try storing them in a fridge in an open brown paper bag to help absorb excess moisture and prevent spoilage.

(NaturalHealth365)  Every 34 seconds in the United States, somebody dies of heart END_OF_DOCUMENT_TOKEN_TO_BE_REPLACED

(NaturalHealth365) You’ve probably heard that too much sugar harms your health.  Sugar END_OF_DOCUMENT_TOKEN_TO_BE_REPLACED