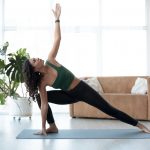 (NaturalHealth365) For those who suffer from migraine headaches, the throbbing, pulsing pain – sometimes accompanied by nausea, vomiting, and sensitivity to light – can seem unbearable.  And the fact that attacks can last for hours and even days adds another layer of misery.  Western medicine attempts to treat migraines with drugs such as acetaminophen, ibuprofen, barbiturates, and opioids.  But, the adverse effects of these medications can run the gamut from drowsiness and confusion to addiction, stomach ulcers, and liver damage.

Sadly, only about half of migraine sufferers report relief from taking prescribed medications.  But, there is some good news: a new study published in the official journal of the American Academy of Neurology reveals that yoga benefits migraines – and allows patients to take fewer drugs.

The 2020 study published in Neurology involved 114 adult volunteers who experienced between four and 14 migraine headaches a month.  Participants were randomly divided into two groups – one taking their regular migraine medications and one in which yoga was added to the regimen.

The yoga consisted of an hour-long routine of breathing, relaxation techniques, and yoga postures.  For the first month, the volunteers in the yoga group were supervised by an instructor three days a week.  Over the next two months, they performed the yoga at home five days a week.  Both groups received identical counseling regarding common-sense lifestyle techniques to manage migraines, including getting sufficient sleep, eating properly, and exercising regularly.

After three months, the results were definitive: adding yoga offers natural migraine relief.  Adding a yoga routine to a regimen of prescribed medications significantly reduced the severity and frequency of headaches.

Impressive study results: Do this regularly to reduce your medication in only three months

The team reported that while patients in both groups experienced improvements in headache frequency, duration, and impact on daily life, the yoga group’s benefits were more pronounced.

In fact, the yoga group ended up with an average of 4.7 migraine headaches a month – down from 9.1 – while the medication-only group cut their headaches by only 12 percent (a much more modest decrease).  In addition, the yoga group was able to take less medication, with their average usage dropping by a hefty 47 percent by the end of the three-month study.

Once again, the meds-only group didn’t fare as well. In fact, this group’s decrease in the number of pills taken was only 12 percent (again!)

The lead author of the study – Rohit Bhatia, M.D., D.M., D.N.B. – pointed out a financial benefit of yoga as well.  The yoga group did not need to purchase as much medication, thereby reducing the treatment costs – what Dr. Bhatia called a “game-changer” for those struggling to afford expensive prescription drugs.

Previous research has shown that yoga can help ease harmful psychological and physical conditions, such as chronic back pain, systemic inflammation, insomnia, and depressive rumination (unhelpful obsessing over real or imagined problems).

A relatively recent study has highlighted the ability of yoga to reduce the symptoms of chronic concussion.  Chronic concussion symptoms – which include headaches, fatigue, and depression – are sometimes described as the “invisible injury” in brain trauma incidents – and are notoriously difficult to treat.

In the first-ever meta-analysis of research on the effects of yoga and mindfulness techniques on chronic concussion symptoms, the authors reported that these natural interventions could significantly cut fatigue and depression while improving cognitive performance and quality of life.  The researchers, who called the results “remarkable,” reported that mind-body interventions for mild traumatic brain injury “consistently improved symptoms” in nearly every measured outcome – with no reported adverse effects.  The team added that the approach – while not a miracle cure – is a valuable tool that can provide benefits over time.

To conduct the review, which was published in Applied Psychology: Health and Well-Being, the investigators looked at 22 different studies involving a total of 539 participants.

Ward off migraines with natural techniques and powerful nutrients

Early interventions may help stop a migraine headache before it takes hold.

At the first sign of a migraine – which can involve such diverse symptoms as sudden mood changes, food cravings, frequent yawning, and visual disturbances – experts advise seeking out a quiet, darkened place.  Hot compresses applied to the head and neck can sometimes help deter an attack – as can heating pads and warm baths.  (Alternately, some migraine sufferers report successfully warding off a migraine with ice-cold compresses).

Avoid skipping meals, and steer clear of nicotine, alcohol, and processed foods laden with preservatives and sodium.  It’s a good idea to keep a journal to discover what provokes migraines for you – remember: chocolate, aged cheeses, and wine are common culprits.

And, getting sufficient exercise can help release serotonin and endorphins, neurochemicals that play a vital role in regulating pain perception.

Other natural treatments for migraines include ginger root, valerian, and peppermint.  Inhaling the scent of lavender through aromatherapy has also been shown to relieve migraines.

Maybe it’s a good time for you and your integrative doctor to discuss the possibility of supplementing your migraine treatments with yoga.  After all, it’s simple, accessible, non-invasive, and drug-free.