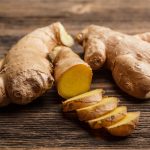 (NaturalHealth365) Alzheimer’s disease, a neurodegenerative condition that impairs memory and cognitive abilities, currently affects over 6 million Americans – and causes the death of 83,000 people every year.  Unfortunately, rates of the disease are soaring, with the Alzheimer’s Association predicting that this number will climb to 13 million by the year 2050.

Conventional pharmaceutical drugs to address Alzheimer’s disease have shown disappointing results, and researchers are searching urgently for novel therapeutic agents to use against this debilitating condition.  Now, recent research has provided a ray of hope. In a review published in January 2021, the authors reported that ginger combats the oxidative stress, inflammation, and neuron cell death that contribute to Alzheimer’s disease.

In a review published in Biomedicine and Pharmacotherapy in 2021, the authors used human, animal, and cell studies to evaluate the effects of ginger – and its bioactive constituents gingerol, shogaol, and borneal – on Alzheimer’s disease.  Scientifically known as Zingiber officinale, ginger is an ancient herb that has been revered in Ayurvedic and traditional Chinese medicine for centuries for its ability to treat a host of ailments – including coughs, colds, infections, rheumatism, digestive problems, and fevers.  (And yes, ginger has a long history of herbal use for memory problems as well!)

The team noted that studies on fish, mice, and humans have consistently shown that ginger can improve memory and cognition.  In one study published in Evidence-Based Complementary and Alternative Medicine, researchers assessed the effects of ginger supplementation on cognitive tasks and working memory in middle-aged women.  The reviewers reported that ginger improved scores for word recognition, spatial working memory, and numeric working memory.  Researchers believe that ginger enhances memory by increasing the expression of a protein known as nerve growth factor (NGF).

Encouragingly, ginger has also been shown to inhibit beta-amyloid peptides, which have been tied to “senile plaques” that trigger Alzheimer’s disease.  And the effects can be dramatic.

In one study, treatment with ginger reduced amyloid plaque-induced behavioral dysfunction – along with brain cell death.  In addition, a compound in ginger known as 6-shogaol has been shown to help block inflammatory chemicals, or interleukins, involved in the development of Alzheimer’s disease.  And, finally, ginger boosts levels of acetylcholine, a neurotransmitter essential for memory and learning.

The authors concluded that ginger possesses “great potency for improving memory functions” and is a “safe nutraceutical that can be applied to combat neurodegenerative diseases.” They called for more research to further explore the exciting neuroprotective effects of ginger.

Scientists think that Alzheimer’s disease stems from age-related impairment in the cell mitochondria, which triggers the release of harmful free radicals.  The subsequent oxidative damage causes all sorts of mischief – such as increasing the neurofibrillary tangles and beta-amyloid plaques, which contribute to Alzheimer’s disease.

Free radicals also cause the release of toxins such as malondialdehyde while affecting levels of antioxidants – including glutathione and superoxide dismutase – in the body’s natural defense system.

By the way, Alzheimer’s disease is the leading form of dementia – a steady decline in thinking, behavioral and social skills.  Sadly, experts say the incidence of dementia doubles every ten years after age 60.

Ginger has all the right “anti’s” to prevent disease

Neuroprotection is not the only weapon in ginger’s arsenal against disease.  The authors had high praise for ginger’s other therapeutic effects as well, noting that its antioxidant and anti-inflammatory powers help it act against cancer and type 2 diabetes.  Ginger is also antibacterial, antifungal, and antispasmodic – and can act as a natural fever reducer.  As if that weren’t impressive enough, ginger may even promote weight loss, lower blood sugar and help decrease levels of harmful LDL cholesterol.

Believe it or not, ginger is just getting started!  The review authors also noted that a ginger constituent known as 6-gingerol could help protect against stomach ulcers, boost the immune system, protect the liver and alleviate allergic reactions.  (In fact, it’s difficult to think of a condition that ginger doesn’t help!)

Use fresh or powdered ginger to add peppery, “zippy” flavor to recipes

While ginger is treasured in herbal healing, it has a multitude of culinary uses as well.  You can utilize fresh ginger root or powdered ginger to enliven beef, poultry, and fish recipes – along with sauces, stews, vegetables, and salads.  You can even steep ginger into a soothing, warming tea by thinly slicing an inch or two of ginger root and boiling it for 10 minutes.  (Add honey and lemon juice for even more flavor and antioxidant punch!)

Incidentally, ginger’s close relative, turmeric, is believed to have many of the same therapeutic effects as ginger – thanks to its content of a powerful antioxidant known as curcumin.  So why not combine both of these flavorful spices in the same recipe?

Ginger supplements are available in capsules and tablets, with natural health experts typically advising around 1,500 mg a day in divided servings.  If you are interested in supplementing with ginger, check first with your trusted integrative healthcare provider.  While ginger is generally recognized as safe when used in moderate quantities, excessive amounts can cause side effects such as heartburn and diarrhea.

The new research reveals ginger’s potential as an important weapon in the decades-long battle against Alzheimer’s disease. Wouldn’t it be ironic if a lifesaving natural therapy was “hiding in plain sight” the whole time?

(NaturalHealth365)  Horsetail – a tall, shaggy weed that grows in wetlands and END_OF_DOCUMENT_TOKEN_TO_BE_REPLACED