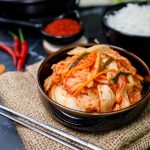 (NaturalHealth365)  Kimchi – a mix of fermented, spiced vegetables that features cabbage as a key ingredient – is a traditional Korean specialty with a long history of culinary and medicinal use.  In fact, experts say that people have been enjoying the benefits of kimchi for over 3,000 years!

While kimchi has long been recognized for its nutritional and probiotic value, it is currently impressing medical researchers with its intriguing antiviral properties.  In an important new review published in Trends in Food and Science Technology, the authors proclaimed kimchi one of the “five healthiest foods in the world” and praised it for its ability to prevent and treat an array of viruses, including those that cause life-threatening respiratory diseases.  So let’s take a closer look at this highly promising research on the benefits of kimchi.

Review:  Benefits of kimchi include boosting the immune response

In the new review published in July of 2021, the authors focused on Korean functional foods – particularly fermented foods such as kimchi – and their potential for preventing viral infections.  The research also shed light on the all-important relationship between nutrition, gut bacteria, and the immune system and showcased the ability of healthy eating patterns to strengthen the immune system – particularly important since the onset of the COVID-19 (SARS-CoV-2) pandemic.

The team found that a beneficial type of lactic acid bacteria in kimchi, Lactoplantibacillus Plantarum, not only stimulates the all-important immune response but increases levels of the natural virus-fighting proteins interferon and interleukin.  In addition, L. Plantarum interferes with viral replication, combating the ability of viral infections to spread.  In one awe-inspiring study cited by the authors, the scientists hypothesized that kimchi could be more effective than Tamiflu – a pharmaceutical antiviral drug considered the “gold standard” of medical treatment for the H1N1 influenza virus.

The authors concluded that the regular consumption of kimchi and other traditional fermented foods could offer protection from some viral diseases.  Acute respiratory infections (including H1N1) currently claim the lives of roughly 4 million children a year worldwide – a heartbreaking toll.

Here is why the gut microbiome is essential for health

According to experts, the gut microbiome – or community of bacteria in the intestinal tract – contains an astonishing 100 trillion bacteria.

However, this abundance of intestinal bacteria is no cause for alarm – as most of these microbes are “friendly.”  In fact, it’s likely that we would not survive long without them.  Among its other essential tasks, the gut microbiome breaks down dietary fiber, produces vitamins such as vitamin K and biotin, helps to regulate the metabolism, influences mood, and cognition, and boosts the immune system, thereby helping to ward off pathogens and disease.

And, when necessary, gut bacteria can even help “put the brakes” on an excessive immune response.  For example, recent animal research reveals that bacteria in the gut microbiome may help to prevent an overactive immune response by regulating levels of active vitamin A – findings that could play a vital role in the prevention and treatment of autoimmune and inflammatory diseases.

It turns out that kimchi has all the right “anti’s” for promoting health.  Studies have shown that the benefits of kimchi include antioxidative, anti-inflammatory, antibacterial, antidiabetic, and anticancer effects.

When it comes to nutrition, kimchi is a powerhouse.  Nutrient-rich Napa cabbage – high in vitamin C, vitamin K, iron, calcium, and potassium – is at the heart of most kimchi recipes, which are further enriched with the addition of garlic, onions, ginger, carrots, and chili peppers.  The additional vegetables are fermented through saturation with generous amounts of salt, then further flavored with seasonings and spices.

According to the U.S. Department of Agriculture, a half-cup of kimchi contains a modest 20 calories, four grams of carbs, one gram of protein, a gram of dietary fiber, and zero fat.  Satisfying, tasty, and nutritious, kimchi makes an excellent snack.

Kimchi is rich in bioactive disease-fighting and anti-inflammatory antioxidants

While individual kimchi recipes can vary, you can usually expect to see some seriously healthy ingredients in the mix.  For instance, kimchi recipes featuring carrots will be high in carotenoids – natural plant pigments that fight disease – while chili peppers, another common ingredient in kimchi, yield capsaicin – a natural compound with antibacterial, antiviral, anti-obesity, and painkilling properties.  Napa cabbage, a mainstay in kimchi, is a member of the super-healthy cruciferous family of vegetables – and features cancer-fighting molecules known as sulforaphanes and isothiocyanates.

Clearly, it’s no accident that knowledgeable researchers have included kimchi in the ranks of the world’s top superfoods, alongside such nutritional superstars as spirulina, turmeric, miso and goji berries.  (You knew we were going to eventually reveal the other four contenders)!

So, maybe it’s time to make kimchi a regular part of your healthy daily diet.

Sources for this article include:
NIH.gov
ScienceDaily.com
VeryWellFit.com

(NaturalHealth365)  Every 34 seconds in the United States, somebody dies of heart END_OF_DOCUMENT_TOKEN_TO_BE_REPLACED

(NaturalHealth365) You’ve probably heard that too much sugar harms your health.  Sugar END_OF_DOCUMENT_TOKEN_TO_BE_REPLACED