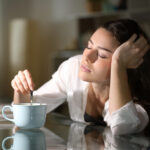 (NaturalHealth365)  Poor sleep impacts everything from your ability to focus to your risk of chronic diseases.  However, many Americans don’t get enough sleep, leaving many to try and “catch up” on sleep over the weekend.

Chronic lack of sleep may cause lasting damage

Sleeping in and catching up on missed sleep can feel amazing when you haven’t slept enough.  But how much good does makeup sleep really do?  This is what the recent study published in the Journal of Experimental Medicine sought to find out.  During the study, fourteen adults slept 90 minutes less than their typical 7.5 to eight hours for six weeks.

At the end of the study, researchers found that the long-term lack of sleep impacted some of the participants’ DNA.  DNA within some of their immune system stem cells, priming their systems for inflammation.  Short sleep also appears to have the same effect on mice – even after catching up on sleep, mice show signs of compromised immune systems after prolonged lack of sleep.

Ultimately, researchers determined that long-term lack of sleep can quickly lead to damage within the body that’s hard to fix.  Not only that, but sleep debt can lead to irritability, memory problems, mood disturbances, and gastrointestinal problems.

Adequate sleep is critical for MANY reasons

The research suggests that trying to make up for lost sleep doesn’t work.  You may physically feel better after catching up on sleep, but if you regularly miss out, it could mean permanent cellular damage and a higher risk of chronic diseases like diabetes, high blood pressure, and obesity.  The average adult requires about seven or eight hours of sleep each night for optimal health.  Children and teenagers need even more.

Adequate sleep is essential for several reasons.  It gives your mind and body time to rest and recover from your day.  Everything you’ve been through during the day is processed during sleep so that it can become stored as memories or removed from your mind.  Your body releases vital chemicals and hormones as you rest, allowing your organs and tissues to be refreshed.

Additionally, the brain is full of microvessels, known as the glymphatic system, which removes waste from the brain as you sleep.  You could also be missing out on the highest quality stage of sleep, known as the rapid eye movement (REM) cycle, if your sleep is broken or too short.

How to get a better night’s sleep

Adequate sleep is essential for your health and well-being.  So how can you sleep better?  For one, aim for a consistent bedtime.  Strive to get at least a few hours of exercise every week, as well as exposure to natural light during the day.  Another good idea is to avoid artificial light from computers or other electronic devices for a couple hours before bedtime.  Plus, if you sit outside in the nighttime darkness, this will help to raise your melatonin levels – which will help you to sleep well.

Avoid alcohol, caffeine or sugary foods for several hours before bed, as these can negatively impact your sleep quality.  And if you have trouble falling or staying asleep, a melatonin supplement may be helpful.

(NaturalHealth365)  Horsetail – a tall, shaggy weed that grows in wetlands and END_OF_DOCUMENT_TOKEN_TO_BE_REPLACED

(NaturalHealth365)  Menopause is a natural part of getting older, signaling the end END_OF_DOCUMENT_TOKEN_TO_BE_REPLACED

(NaturalHealth365)  According to the American Association of Endodontists, more than 25 million END_OF_DOCUMENT_TOKEN_TO_BE_REPLACED