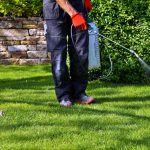 (NaturalHealth365)  A recent study conducted at George Washington University shows one in three people has likely been exposed to a harmful pesticide.  The study reveals children have an elevated risk of exposure to a potentially harmful weed killer, called 2, 4-D.

The study analyzed urine samples to identify the presence of the pesticide.  The participants enrolled in the National Health and Nutrition Examination Survey to help researchers accurately estimate the use of the chemical in agricultural settings, both public and private between 2001 and 2014.

Why is exposure to harmful pesticides increasing?

The research noted that above-determined exposure to the 2, 4-D chemical is on the upswing.  The spike in exposure to the pesticide and other harmful chemicals stems from the use of those chemicals in agricultural and residential settings.  The question is whether there will be serious health ramifications from exposure to such chemicals, especially during early childhood years.  Scientists expressed concerns over the possibility of the chemicals in weed killer causing health issues in kids.

The study results show human exposure to 2,4-D has “significantly” increased over the years.  Making matters worse is the fact that study authors predict the exposure levels to the potentially harmful chemical will continue to rise as time progresses.

Kids ages 6-11 had more than double the risk of increasing exposure to 2,4-D

Out of the more than 14,000 people involved in the survey, more than 4,500 had meaningful levels of 2, 4-D.  It is interesting to note that those who had the pesticide in their urine ranged from 17% at the study’s beginning to 40% about a decade later.  As a result, it is safe to conclude that the exposure to the herbicide increased across the board as the study progressed.

The study also found kids between the ages of 6 and 11 had two times as high of a risk of being exposed to the chemical.  It is also worth noting that women of childbearing age were nearly two times as likely to be exposed to 2, 4-D than men in the same age group.  The sad truth is human exposure to 2, 4-D and similar chemicals will likely continue to increase in the decades ahead as the herbicide is becoming that much more popular.

Are weed killers worth the risk?

Now that it is crystal clear that weed killers and other herbicides, pesticides, and lawn/gardening spray products contain harmful chemicals, the question must be asked: are they worth the risk.  Homeowners and parents will find it interesting to learn that 2,4-D was initially created way back in the 1940s, serving as a means of boosting crop yields and growing lush green grass.  However, exposure to the chemical has been tied to a wide array of health problems ranging from reproductive system issues to cancer and beyond.

Unfortunately, time will probably reveal that exposure to lower levels of any weed killer is not much better than at higher levels.  For now, you can do your part to reduce your family’s exposure to pesticides by eating organic fruits and vegetables.  Ultimately, for the best quality food, support your local (chemical free) farmer, purchase food from organic farmers market vendors and start growing your own food.

(NaturalHealth365)  Research over the past decade has shown, without a doubt, that END_OF_DOCUMENT_TOKEN_TO_BE_REPLACED