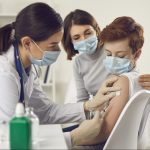 (NaturalHealth365)  The U.S. government’s Vaccine Adverse Event Reporting System (VAERS), which is co-managed by the Centers for Disease Control and Prevention (CDC) and the U.S. Food and Drug Administration (FDA), is a passive reporting system that is “especially useful for detecting unusual or unexpected patterns of adverse event reporting that might indicate a possible safety problem with a vaccine,” according to the Department of Health and Human Services (HHS).  As an early warning system, we know VAERS is crucial for sounding the alarm about potential safety issues and adverse effects from licensed injections.  As many staunchly pro-vax advocates suggest, it is NOT something to be downplayed or minimized, especially since we know that VAERS is historically underreported.

Indeed, the most recent VAERS data reveals some alarming new correlations between the COVID shot and injury, illness, and death among innocent children.

As of early June 2022, the CDC and FDA report, via VAERS, that nearly 50,000 American children (up to age 17) have suffered harm following a COVID shot.  Incredibly, more than 7,500 kids have required hospitalization or an emergency room visit due to their jab-correlated injury.

The data also reveals that the vast majority (40,639) of these reported pediatric injuries occurred following the Pfizer mRNA jab.  Another 9,170 injury reports were associated with the Moderna mRNA jab.  Finally, the J&J shot was associated with 1,326 reported injuries.

Of the kids reported as injured to VAERS, 1,047 of them experienced either a life-threatening issue and/or have been left permanently disabled soon after receiving their shots.  Another 125 children died.

This might not even be the whole horrible picture, either, once we take into consideration that only about 1 percent of all jab-related adverse events are ever actually reported, according to HHS.  Furthermore, this data reflects what’s happening in the United States only.  Who knows (and will we ever know?) how many more children across the globe are suffering?

It is truly sobering and chilling to think of the pain and fear in families and communities worldwide right now.

We find it reasonable to ask:

Isn’t all this VAERS information a sufficient “signal” to warrant further investigation?  To alert regulators and public health officials to the presence of a potential (and serious) safety concern related to these shots – shots which, as everyone from the CDC to Bill Gates now readily admit, do NOT work to stop transmission of SARS-CoV-2?

Isn’t it doubly concerning that Pfizer just received emergency use authorization (EUA) for their highly profitable jab for kids under five?  We’re talking kindergarteners, toddlers, and infants, all being injected with this gene-related therapy (right alongside all the other shots that the CDC says kids need … and all without any testing of the impact of all these shots given around or at the same time).

You’ll recall that the survivability of COVID-19 is high among all age groups, especially among young and healthy individuals.  With all this in mind, it is hard not to wonder why the push to promote the agenda of injecting the masses, up to and including babies, has been so relentless.

(NaturalHealth365)  The denial and gaslighting were strong from mainstream media, government officials, END_OF_DOCUMENT_TOKEN_TO_BE_REPLACED