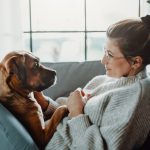 (NaturalHealth365)  We all love our furry friends, but did you know they may actually be good for your brain?  That’s right, Chairman Meow and Rover could do your gray matter a world of good, new research shows.

This is especially true in older adults, who typically exhibit cognitive decline starting in middle age and growing more severe as they hit their 70s, 80s, and 90s.  It turns out dogs (and cats) are man’s best friends, with the benefits of ownership increasing the longer people own them.

So how do you get these pet-owning perks in your own life?  Keep reading for the details.

Discover the WEALTH of health benefits in having family pets

Most of us intuitively know that dogs and cats are good for you, physically and spiritually.  The benefits of pet-owning range from reduced stress to lower blood pressure to increased feelings of social support.  In addition, they increase exercise, decrease loneliness, and generally make the world a more cheerful place to be.

The above article even indicates that they may benefit children who have autism or attention deficit disorder.  That’s a lot of perks in one cute package.

Pets also give you a reason to get down on the floor, be more active, and engage in some oxytocin-producing snuggles.  That’s why they’re such a great tool in your pound-shedding toolkit, especially following those rough pandemic months.

The study included more than 1,300 adults with an average age of 65, all of whom started out within normal cognitive parameters.

Researchers pulled cognitive tests from the Health and Retirement Study then administered those tests to their participants.  They tracked them for six years, using the same metrics to determine any decline in cognitive levels.  The research was clear: those who had pets were less likely to decline.

The longer you have your furry friend, the greater the benefits

One element of this research is important to note.  While any amount of time may be linked to a slower cognitive decline in aging adults, the study demonstrated that those who had their pets for five years or more experienced the greatest benefits.

That’s not to say owning pets for a short period is useless, of course.  But, in general, owning pets seemed to produce some reduced cognitive decline, it just wasn’t as strong.

Overall, Black adults, college-educated adults, and men were the greatest beneficiaries of the protective effects of pet ownership.  However, more research is needed to determine why that might be.

Pets may help reduce the damaging effects of stress

It’s no secret that chronic stress is bad for your health.  Simply put, higher levels of cortisol are linked to both greater morbidity and mortality.  Those who live in permanently stressful conditions due to living situations, work, relationships, or other factors have generally shorter lifespans and reduced quality of life.

Again, it’s not necessarily clear why pets help people maintain mental acuity, but a likely hypothesis is a link with stress.  Because the latter increases cognitive decline, and because pets decrease stress, those with animals may experience less of this natural degradation.

One thing is clear: if you love your furry friends and believe they contribute to your quality of life, you’re not wrong!