Discover the cancer-fighting benefits of pomegranates 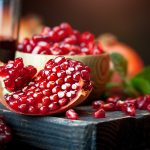 (NaturalHealth365)  The pomegranate has come a long way.  Once best known as a source for the bright-red grenadine syrup used in drinks, this succulent fruit is now a rising superstar in the world of natural health.

Rich in beneficial micronutrients and antioxidants, pomegranates are generally acknowledged as a “superfood.”  But, they have another important attribute.  Researchers say that compounds in pomegranate have impressive abilities to fight the development, growth, and spread of cancer cells.  And, a new study raises the ingenious possibility of using a pomegranate byproduct – one that has previously gone to waste – in a novel intervention for this deadly disease.  Let’s look at some of the ways by which pomegranates target cancer.

Pomegranates are a treasure trove of potent antioxidants

In a 2021 study published in PLOS One, researchers investigated the effects on cancer cells of an extract made from the peels of immature, unripe pomegranates, which are normally discarded in a process known as “thinning.” The team noted that the peels are particularly rich in antioxidant compounds such as punicalagins, gallotannins and ellagitannins, which have anticancer effects.

Examining the extract’s effects against lung and colon cancer cells, the researchers noted that it had “robust” effects in inhibiting tumors and killing cancer cells – and was even more potent than extracts made from fully ripened pomegranates. The researchers noted that using these byproducts could become a valuable part of a “virtuous circular economy” in which peels and other waste would be recycled and utilized.

Pomegranate appears to hold promise in the fight against prostate and breast cancer, along with cancers of the colon, liver, thyroid, ovaries, skin and lungs. When it comes to inhibiting cancer, pomegranate has more than one mode of attack. Test tube studies have shown that pomegranate extracts stop cancer cells from dividing and growing, while not interfering with the division of normal cells.

In addition, it induces apoptosis, a sort of pre-programmed cell suicide, in cancer cells. It also slows angiogenesis, the formation of new blood vessels to nourish tumors. Finally, it turns off genes related to inflammation and reduces the activity of pro-inflammatory chemicals.

And, there’s yet another encouraging finding. Researchers report that pomegranate boosts the effectiveness of chemotherapy drugs, while helping to alleviate their side effects. In fact, pomegranate has been studied in conjunction with fluorouracil (a pharmaceutical cancer treatment) and helped to prevent the damage to the intestinal lining that this drug can cause. In addition, it made the flurouracil more effective at killing cancer cells.

Slows the growth of prostate cancer

According to the CDC, roughly 13 out of every 100 men will develop prostate cancer – and three of these will die from the disease. Promisingly, cell studies have shown that punicalagin from pomegranates blocks prostate cancer cell growth and induces apoptosis.

But, what about human studies? It turns out that these have been performed as well – and support the ability of pomegranate to slow the increase of PSA, a biomarker for prostate cancer that can help measure response to treatment.

In an older (but still-influential) study published in the peer-reviewed journal Clinical Cancer Research, scientists investigated the effect of pomegranate juice on PSA levels in men who were experiencing rising PSA rates despite surgery or radiation treatments for prostate cancer. The men received 8 ounces a day of pomegranate juice, which contained 570 mg of polyphenol gallic acid equivalents.

Participants who received the juice experienced a lengthening of PSA doubling time, with a 12 percent decrease in cell proliferation and a 17 percent increase in desirable apoptosis of cancer cells. The pomegranate juice also improved levels of beneficial nitric oxide. It appears that pomegranate juice can indeed slow cancer growth, but more research is urgently needed.

In a recent study published in Cancer Biology and Therapy, researchers found that ellagic acid and luteolin from pomegranates inhibited the spread and invasiveness of ovarian cancer. The compounds suppressed certain forms of matrix metalloproteinase, or MMP, a protein that degrades normal tissue and cells in order to assist the spread of cancer. Of the two compounds, ellagic acid was more promising in reducing MMPs.

You can easily obtain pomegranate’s cancer-fighting compounds by eating fresh pomegranate fruit or drinking the juice. However, make sure to choose a high-quality, unsweetened, pure pomegranate juice. Pomegranate beverages marketed as “drinks” may contain a mixture of juices, and will not provide the same benefits.

Pomegranate extract is also available. Natural health experts advise choosing a formulation standardized to 30 percent punicalagins and 22 percent punicic acid. Of course, don’t attempt to address cancer, or any other medical condition, with pomegranate or pomegranate supplements without checking first with your integrative doctor.

(NaturalHealth365)  Research over the past decade has shown, without a doubt, that END_OF_DOCUMENT_TOKEN_TO_BE_REPLACED