Potatoes can be a healthy option, but there is a catch 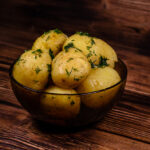 (NaturalHealth365)  Potatoes are versatile vegetables that people have enjoyed for centuries.  But in recent decades, they’ve gotten a bad rap.  They have been blamed for possible negative health effects and vilified due to the popularity of low-carb dieting.

However, new research indicates that these starchy vegetables aren’t so bad after all.  In fact, they can even be healthy.

Despite their bad reputation, potatoes can be healthy, study finds

Experts agree that vegetables are essential to a healthy diet, offering numerous nutrients and health benefits.  Yet, potatoes are sometimes more “controversial.”

Some past studies have suggested that potatoes could negatively impact your health – possibly even increasing your risk of diabetes.  However, new research reveals there’s more to the story.

The data analysis found that higher vegetable consumption significantly reduced the participants’ type 2 diabetes risk.  This is no big surprise.  But what about potato consumption?  Is this really “bad” for everyone?  Not necessarily, according to this study.

The one key factor for disease prevention

While some studies have suggested that potatoes could increase type 2 diabetes risk, the data analysis found this a bit misleading.  In fact, potato consumption did not influence diabetes risk either way.  So, what does increase diabetes risk?

Past studies have not considered all the different ways of preparing potatoes.  That’s the key: what are people putting on their potatoes and, of course, how are they prepared.  The Danish research provides important insights because people in Denmark eat this staple vegetable in many different ways.

The new data analysis allowed researchers to separate these different potato preparations.  Without this distinction, potatoes can appear to cause some increased risk of diabetes.  But when potato preparations were analyzed separately, this starchy vegetable did not affect diabetes risk.

For example, compared to fries and mashed potatoes, boiled potatoes are not linked to higher diabetes risk.  There are a few reasons for this.  For one, mashed potatoes are typically made with too much butter and cream.  Of course, the study does not even make another important point about the quality of the butter and cream.  Toxic forms of butter or cream –  produced by most conventional farms – add toxicity to the body that increased the risk of inflammation, fatty liver disease and diabetes.

In addition, with all due respect to the research, no study (that we know of) has ever stated that ‘small amounts of grass fed butter or cream in the diet cause diabetes.’  Having said that, large amounts of conventionally-produced butter and cream is not a good idea.

In addition, according to the Danish study, people who eat more fries … were more likely to to drink soda!  Obviously, soda (loaded with simple sugars) is a bad idea, especially if you’re looking to avoid diabetes.

Therefore, researchers concluded that potatoes could actually be a healthy vegetable choice – depending on how they’re prepared.

How to reduce your risk of diabetes and chronic disease

The study brings good news for potato lovers.  It turns out that potatoes can be healthy as long as they’re not loaded with butter, cream, and vegetable oils.  Remember, like with all things, moderation is the key to a long, healthy life.

To be clear, this Danish study did not suggest that eating potatoes will prevent type 2 diabetes.  But, it’s safe to say, that in terms of diabetes risk, potatoes are not really the “enemy” that some people would suggest.

As a final note, it’s always a good idea to eat a wide variety of colorful (organic) fruits and vegetables to prevent chronic disease.  And, naturally, regular exercise is always a good idea.  This will help you stay as healthy as possible in the long term.

(NaturalHealth365)  If you need yet another reason to eat your veggies, here’s END_OF_DOCUMENT_TOKEN_TO_BE_REPLACED

(NaturalHealth365)  Research over the past decade has shown, without a doubt, that END_OF_DOCUMENT_TOKEN_TO_BE_REPLACED