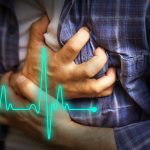 (NaturalHealth365) For years, natural health experts and integrative physicians have sounded the alarm on the dangers of the Standard American Diet – which is aptly abbreviated as SAD.  High in processed products, unhealthy fats and refined sugars, and lacking in desirable anti-inflammatory foods, SAD is believed to increase inflammation and trigger serious conditions, including heart disease and stroke.

While this concept – that the foods we eat can influence inflammation and cardiovascular health – might seem to be common sense, scientific studies on the topic were scarce.

Until last week, when a study published in the respected Journal of the American College of Cardiology showcased the dangers of pro-inflammatory foods and revealed the startling extent to which diet affects risk of heart attack and stroke.  To learn which foods are inflammation-promoting “villains” and which are inflammation-quenching “superheroes,” keep reading.

The team then used pooled analyses to evaluate the long-term risk of heart disease in the two groups.  The results were eye-opening!!

It doesn’t get any more cut-and-dried than that.

“Eat the rainbow” — in the form of colorful fruits and vegetables

By the way, the “green leafies” also have their share of beta-carotene.  However, the orange/yellow hue is hidden behind darker green pigments.

Dark cherries, blackberries and blueberries are high in a group of plant pigments known as anthocyanins, while bright red tomatoes are loaded up with an antioxidant called lycopene.

Of course, let’s not forget healthy fats – such as nuts – are also great inflammation fighters.  In fact, recent research shows that people who enrich their normal diets with daily walnut consumption had significantly reduced inflammation and LDL cholesterol, when compared to those who didn’t.

Although coffee contains caffeine, a stimulant that can raise blood pressure, many experts feel that coffee’s antioxidant and anti-inflammatory benefits far outweigh the downside.  According to research nutritionists at Johns Hopkins University School of Medicine, coffee consumption may reduce internal inflammation and protect against disease.

Peer-reviewed studies have shown that coffee reduces the odds of developing Alzheimer’s disease, Parkinson’s disease and dementia – particularly in women.  In addition, coffee consumption dramatically slashes the risk of colon cancer and is linked with a lower risk of death from heart disease, kidney disease and diabetes.

For maximum benefit, many experts recommend three to five cups a day (for people unbothered by caffeine). If your doctor has advised you to avoid or limit caffeine, the good news is that decaffeinated coffee can still provide health benefits.

Naturally, if you’re going to drink coffee … be sure it’s organic and skip the white sugar.  You can flavor it up with cinnamon, vanilla extract or cocoa powder instead.  If you really want to get “fancy,” try some fresh made hemp or almond milk.

In addition, stay away from … fried foods, trans fats, chemical preservatives, artificial sweeteners, fast foods and GMOs.  All of these items will greatly increase the risk of chronic inflammation.

The new study – we’re featuring above – found that people who ate a pro-inflammatory diet had lower levels of adiponectin, a fat-burning hormone that can help prevent insulin resistance, combat atherosclerosis and promote weight loss.

So important is adiponectin, in fact, that low levels are linked with the development of metabolic syndrome and obesity-related illnesses.  Clearly, you don’t want to run low on this important hormone.

You can increase your adiponectin levels with daily intake of omega-3 fats, found in cold-water fatty fish, avocados, nuts and olive oil.  These just happen to be “major players” in the Mediterranean diet, which is rich in healthy fats, fruits, nuts and vegetables.

Most experts agree that the Mediterranean diet is vastly superior to the SAD when it comes to supporting heart health.  So, clearly, it just might be time to give this anti-inflammatory – and flavorful – way of eating a try.

(NaturalHealth365)  The food we eat should keep us healthy and strong.  But END_OF_DOCUMENT_TOKEN_TO_BE_REPLACED

(NaturalHealth365)  Being on a diet takes lots of hard work and discipline.  END_OF_DOCUMENT_TOKEN_TO_BE_REPLACED

(NaturalHealth365)  Chicken is the average person’s meat of choice, yet most people END_OF_DOCUMENT_TOKEN_TO_BE_REPLACED