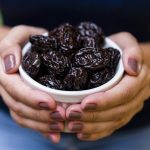 (NaturalHealth365)  Osteoporosis, a thinning of the bones that increases susceptibility to fractures, can have devastating consequences.  The National Institutes of Health reports that a shocking 50 percent of women over age 60 (along with 20 percent of men in that age group) will suffer a potentially debilitating osteoporosis-related fracture at some point.  And, with the “graying” of America, rates of the disease (which disproportionately affects women) are rising.  Experts predict that the national prevalence of osteoporosis among women aged 50 and older will reach 13.6 million by 2030.

Given these grim statistics, a review of studies published this month in the journal Advances in Nutrition delivers particularly welcome news.  The authors, a team of scientists at Penn State University, concluded that a natural dietary intervention – daily consumption of ordinary prunes- may help delay and even prevent the onset of osteoporosis.  So let’s take a closer look at the review – and the bone-building benefits of prunes.

Researchers: “Promising effects” on bone mineral density are one of the many benefits of prunes

Researchers analyzed data from 28 studies – 16 involving animals and 12 involving humans to conduct the review.  They identified multiple studies that showed that eating 100 grams of prunes (about three ounces, or ten prunes) every day for a year increased the mineral density of bones in the forearms and lower spines of postmenopausal women.  And eating between 50 and 100 grams of prunes a day for six months was also shown to decrease a marker of resorption (bone loss) known as TRAP-5b.

Dr. Connie Rogers, an associate professor of nutritional sciences and physiology at Penn State, noted that the prunes helped to inhibit inflammation and suppress markers of oxidative stress.  (Oxidative stress and inflammation, triggered by the loss of estrogen in postmenopausal women, are believed to lie at the root of osteoporosis).  The researchers concluded that incorporating prunes into the diet could help strengthen bones.

Benefits of prunes include reducing bone loss by multiple mechanisms

It turns out that the benefits of prunes for bone health are multi-faceted.  For one thing, prunes contain antioxidants, such as anthocyanins, that help battle oxidative stress.  (In fact, scientists have found that plums – which are basically prunes before they have been dried – contain roughly twice as many antioxidants as peaches and nectarines.  And the drying process causes no loss of antioxidants).

Prunes also contribute bone-building minerals, along with hefty amounts of vitamin K.  Vitamin K, once known primarily for its importance to normal blood clotting, has created a “buzz” in recent research with its ability to escort calcium from the blood and into the bones, where it belongs.  The Penn State team also reported that prunes caused a change in the gut microbiome (the community of bacteria in the intestinal tract), which helped lower pro-inflammatory cytokine levels in the colon.  Finally, prunes decreased levels of malondialdehyde – a marker of oxidative stress – while increasing the expression of important antioxidants such as glutathione and superoxide dismutase.

In older – but still-reputable – research published in 2009 in Aging Research Review, researchers credited prunes with being the “most effective” fruit in both preventing and reversing bone loss.   The scientists used micro-computed tomography to show that prunes could restore bone mineral density to normal levels in rats with osteoporosis, reversing bone loss about as effectively as hormone therapy

Prunes are a nutritional jackpot of phytonutrients, vitamins, minerals, and fiber

Prunes, botanically known as Prunus domestica, are a rich source of high-quality nutrients.  A one-ounce serving contains a fifth of the adult recommended dietary intake for vitamin K, along with various B vitamins, which are needed to convert food to energy and a healthy nervous sys  em.  And prunes offer an array of bone-building minerals – including magnesium, potassium, and phosp  orus.  The serving also contains 2 grams of heart-healthy dietary  fiber.

Yet the caloric cost is a reasonable 67 calories (meaning that even a three-ounce serving, like the one used in studies, clocks in at about 200 calories – less than that of a typical can  y bar).  And, despite their sumptuous, candy-sweet taste, they not only don’t raise blood sugar but may help regulate levels.  (Researchers chalk this up to prunes’ content of dietary fiber and adiponectin, a blood sugar-regulating hormone).

Portable, convenient and tasty, prunes are easy to incorporate into  the diet.  However, to avoid diarrhea, some natural health experts advise keeping their consumption to half a cup a day and limiting prune juice to no more than 8 ounces a day.

While many people are familiar with their stimulating effects on the digestive tract – and their use as a trusted dietary intervention for constipation – it’s likely that far fewer realize just how much these nutritious dried fruits can bolster and protect the strength and density of bones.  As the new review suggests, eating prunes may help you “stand strong” against a crippling disease.