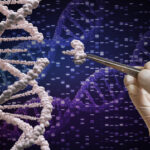 (NaturalHealth365)  It is no secret that social engineers want to shape (and control) human behavior, albeit often in concealed ways.  In particular, Bill Gates seems to be hellbent on controlling people, society, and the future of all life on this planet with CRISPR technology.

CRISPR technology, championed by Gates, the inner party of government and global elites, has the potential to lead to a high-tech dystopia within a couple of decades or less.

What is CRISPR technology?

CRISPR, an acronym short for Clustered Regularly Interspaced Short Palindromic Repeats, functions as a metaphorical pair of shears that splits specific sequences of plant DNA with surprisingly accurate precision.  Such tech empowers mad scientists to alter portions of DNA through strategic cuts and then add new segments as desired.

Though the editing of crop genetics is not a novel breakthrough in the year 2022, the use of CRISPR is heralded by elites far and wide as it is comparably accurate and cost-effective.

Here is why gene editing is a net negative for plants, animals, and people

Often touted as a potential solution to the lingering problem of global hunger, CRISPR technology is actually a hidden threat to the human condition.  World food insecurity has been a problem for millennia, yet CRISPR gene-editing tech favored by the cabal of powerbrokers is not the answer we need.  Instead of playing God and editing genetics, a better approach would be electing public officials who prioritize the environment and human rights over corporate interests.

If Gates and the World Economic Forum (WEF) have their way, CRISPR gene editing will be used to “satisfy” the needs of people worldwide.  The sad truth is elites such as Gates are preying on natural human insecurity, taking advantage of artificial food scarcity artificially created by a broken economic system.

Scientists across the globe are uniting against CRISPR gene editing, highlighting how such genetic modification is not only misleading but also risky.  Genetically altering food crops seems innocent and utilitarian on the surface, yet it can potentially cause significant damage to DNA.  In particular, CRISPR critics anticipate that modified plants will generate unanticipated threats, including allergens, toxins, and more.

The moral of this story is that mad scientists’ attempt to supplant the higher power by altering the genetics of plants and animals is not the solution to the problem of resource and food scarcity.  Gene editing is the Wild West of science as it lacks much-needed regulation, is likely to produce unintended side effects, compromise the gene pool of nature, and ultimately threaten the future of every living being on the planet.

Damage to crop genomes alters plant and animal chemical composition, potentially resulting in mutations, deformation, and gene function changes that prove mutually harmful to all living beings, including human consumers.  In this manner, CRISPR is somewhat analogous to the gain-of-function research championed by the likes of Anthony Fauci.  The COVID-vax debacle spearheaded by Fauci makes it crystal clear that elites, including those in the scientific community, cannot be trusted as vanguards of the human condition today, tomorrow, and in the decades to come.

Stop CRISPR before it’s too late

There is still hope for the human species and the planet, as the future is still undetermined.  Freedom fighters, environmentalists, civil libertarians, and justice warriors alike must heed this siren call, uniting to advance the collective interest.

Stop CRISPR gene editing before it becomes a threat to the generations that follow, and the species will have a puncher’s chance at prevailing against the power-hungry cabal of elites who devilishly manipulate the masses for control, personal gain, and generational wealth.

(NaturalHealth365)  The Wall Street Journal (WSJ), an organization that reports the news, END_OF_DOCUMENT_TOKEN_TO_BE_REPLACED