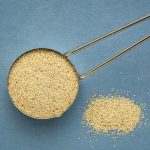 (NaturalHealth365) Clearly, the demand for healthful, gluten-free foods has never been greater.  The Centers for Disease Control and Prevention (CDC) estimates that at least 3 million Americans live with celiac disease – an autoimmune condition triggered by gluten in wheat, barley, and rye.  (Celiac disease not only interferes with the absorption of essential nutrients but can lead to other serious conditions, including neurological problems, infertility, osteoporosis, and cancer).  In addition, BeyondCeliac.org reports that a surprising 18 million Americans are “gluten sensitive” – meaning they experience adverse effects from gluten despite testing negative for celiac disease.

While many people turn to gluten-free alternatives such as quinoa and amaranth, nutritionists maintain that these ancient grains, while healthy fare, still leave much to be desired when it comes to delivering hefty amounts of essential vitamins and minerals.  The solution?  Some researchers say that it’s high time to “say hello” to teff seeds – and their remarkable assets.  Recent research has shown that these tiny little packets of gluten-free nutrition carry oversized health benefits.

Cultivated for over 3,000 years, teff seeds have become the protein-rich fuel of champions

Botanically known as Eragrostis tef, teff is technically a seed and not a grain.  Teff seeds and teff flour are derived from a North African grass known as Williams’ lovegrass (aptly named, as teff offers much for health-conscious consumers to love).

Researchers report that citizens of Ethiopia, where teff has been cultivated for over 3,000 years, obtain about two-thirds of their daily protein from teff.  The seeds are traditionally ground into flour and used to make a sourdough flatbread known as injera.  Ethiopia, of course, has given the world a disproportionate amount of champion marathon runners and Olympian gold medalists – a fact not lost on American athletes, who are increasingly adopting teff as a training food.

While Ethiopia grows 90 percent of the world’s teff, the Ethiopian government forbids its export.  Because of this law, teff consumed in North America is typically grown in such locales as Idaho, India, Australia, and the Netherlands.

What makes teff seeds so special?

One of the most remarkable attributes of teff is its sky-high amount of protein, with a 150-gram serving of teff flour providing a generous 25 percent of the body’s daily needs.  Teff seeds and flour are also an excellent source of lysine, an amino acid that is an important precursor to protein.

In addition, teff is loaded with essential minerals.

The same 150-gram serving of teff provides almost 70 percent of the recommended daily value of magnesium, essential for regulating blood pressure.  It also contains 10 percent of the daily value of zinc – indispensable for immune system function and wound healing – and healthy amounts of easily absorbable iron.  In fact, a Cornell University study published just last October in Nutrition revealed that teff enhances absorption of iron and zinc – and may be the reason that dietary iron and zinc deficiencies are less prevalent in Ethiopia than in neighboring countries, where teff is not as popular.  Incidentally, study lead author Elad Tako, an associate professor of food science, praised teff grain as “extremely valuable.

Finally, teff seeds are composed of a whopping 20 to 40 percent resistant starch, a beneficial dietary fiber that has been shown to help prevent colon cancer and manage blood sugar.

Teff’s nutritional value outshines other grains at every turn

The Cornell study is not the only recent research to showcase the benefits of teff.  A 2020 review published in the Journal of Food Quality highlighted teff’s nutritional superiority to other cereal grains, including wheat, maize, barley, and sorghum.

The researchers added that while quinoa and amaranth are gluten-free, they “cannot meet the recommended daily nutrient intake of celiac disease patients.”  (Translation: these grains can’t hold a candle to teff grains when it comes to providing micronutrients for celiac disease sufferers!)

According to the authors, teff is not only a great solution to this problem – but can actually help prevent and treat celiac disease.

And additional research supports this theory.  In an earlier study involving over 1,800 celiac disease patients and published in the Scandinavian Journal of Gastroenterology, the scientists noted that teff helped significantly lessen celiac symptoms.

By the way, the new Cornell study also showed that teff improves the composition and function of the gut microbiome, the community of beneficial bacteria in the intestinal tract.  A healthy, well-balanced gut microbiome is essential for digestive health.

Type 2 diabetes, characterized by increased blood sugar levels and abnormal insulin regulation, verges on epidemic status in the United States – with over 30 million Americans suffering from the condition.  Driven by poor nutrition, obesity, and a sedentary lifestyle, type 2 diabetes can lead to eye and kidney damage, peripheral neuropathy, and increased risk of heart disease.  Fortunately, researchers have found that foods with a low glycemic index can reduce diabetes risk – and teff seeds, with a low score of 35, fill the bill neatly.

In addition, teff contains a whopping 123 mg of calcium per cup.  This high concentration of calcium means that teff may prevent the onset of disorders that set the stage for type 2 diabetes, including weight gain, accumulation of abdominal fat, and osteoporosis.  The impressed authors of the 2020 review ended with a bold prediction: that teff-based foods will make “outstanding” contributions to the prevention and amelioration of type 2 diabetes.

And that isn’t all.

The scientists noted that dietary iron deficiency causes the production of insufficient red blood cells, which causes problems with the transport of oxygen.  While supplements can increase iron intake, they may carry digestive side effects such as nausea, diarrhea, and constipation.  The reviewers noted that consumption of teff is a “safer strategy” to address anemia caused by iron deficiency.  Because heart failure, a life-threatening condition, is linked to iron deficiency, teff can clearly lead to improvements in cardiovascular health.

Use teff flour to make muffins, pancakes, cookies – or add it to stews and stuffings for extra nutritional value.  Teff flour can also be mixed with other gluten-free flours such as amaranth and almond flour.

Or, prepare the seeds as a side dish by cooking a cup with 3 cups of water, then seasoning to taste with cinnamon, ginger, basil, cumin, or cardamom.

With a pleasant, nutty flavor, teff is available in both brown and white varieties.  While brown teff contains higher amounts of amino acids, both types offer substantial health benefits.

Teff isn’t a supermarket staple (yet) but can be purchased in health food stores and online.

Tiny but mighty teff seeds and teff flour offer a bonanza of health benefits for those looking to eliminate or cut back on gluten, which – according to a survey conducted by the Consumer Reports National Research Center – describes up to a third of all Americans.  Clearly, teff is taking its place in the spotlight as a healthful alternative.

(NaturalHealth365)  Every 34 seconds in the United States, somebody dies of heart END_OF_DOCUMENT_TOKEN_TO_BE_REPLACED

(NaturalHealth365) You’ve probably heard that too much sugar harms your health.  Sugar END_OF_DOCUMENT_TOKEN_TO_BE_REPLACED