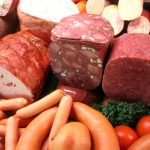 (NaturalHealth365)  Salmonella and campylobacter are two of the most common forms of food-borne bacteria.  They are also two of the most dangerous.  According to government sampling records, big brand poultry giants sold tens of thousands of meat products contaminated with deadly bacteria between 2015 and 2020.  In simple terms, meat products – that are unsafe for human consumption – regularly make their way onto store shelves.

Exposure to excessively high quantities of salmonella and campylobacter bacteria have severe consequences.  Numerous reports of children developing rare and life-threatening autoimmune diseases after consuming these contaminated products demonstrate the seriousness of this issue.  Yet, meat companies carry on their business as usual, and continue producing products that do not meet safety standards, and therefore pose a serious threat to American adults and children.

The USDA has strict standards in place that are meant to regulate the number of bacteria (salmonella and otherwise) that are acceptable for meat and poultry that are to be used for human consumption.  It has been found that between 2015 and 2020, many of the most well-known meat producers had levels of bacteria that well exceeded USDA standards.

Koch Foods, Tyson, Perdue, Foster Farms, and Pilgrim’s Pride were all shown to approve meats and meat products that not only contained extremely high levels of bacteria, but also other debris.  In some cases, workers were told to process rotting meat in with the fresh.  It is believed that many of these same companies violated food safety regulations up to 145,000 times from January 2015 to August 2019 with no fines or repercussions whatsoever from the USDA.

What is really going into your meat?

Employees of the 12 major meat processing plants claim that bacteria isn’t the only thing consumers are being exposed to.  Many of the employees told investigators that boxes of meat were dumped into grinders without the meat ever being cleaned or checked for bacteria or spoilage.

Whatever was in the box went into the grinder.  This included bugs, beetles, insects, and any other type of debris they may have collected in the box during shipment.

Where are the food inspectors?

Another major problem is that food inspectors, who are paid by the federal government to inspect the meat before it is processed, have actually been found sleeping on the job.  This has been witnessed by not only the employees of the meat processing plant but also other inspectors.  With them sleeping on the job, who is protecting our children from blatant exposure to dangerous, and in some cases, deadly bacteria?

What can you do?

What can you do to protect your family from exposure to the dangers of disease-causing bacteria and insect particles?  First, you can boost your children’s immune systems to fight off the many different pathogens found in their environment.  Add Manuka honey which has been proven to fight off drug-resistant forms of bacteria.

Next, buy local!  Forget buying from the large producers.  Buy your meat from a small farm or local farmers market.  There are meat markets in almost every community across America that provide locally grown (100% grass fed) meats that are not exposed to the numerous forms of bacteria as they are transported over long distances.

The meat you’ll get is as fresh as it can be and will have minimal amounts of bacteria compared to what you would be purchasing from your “regular” grocery stores or major retailers.

(NaturalHealth365)  Since the late 1980s, the number of petitions filed with the END_OF_DOCUMENT_TOKEN_TO_BE_REPLACED

(NaturalHealth365)  One of the big talking points of mainstream media, MD influencers, END_OF_DOCUMENT_TOKEN_TO_BE_REPLACED