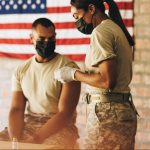 (NaturalHealth365)  Is the United States Military simply trying not to be wasteful … or are they trying to protect themselves from lawsuits?

A recent email revealed by UncoverDC and others shows that US military officials are recommending against giving troops the only version of the mRNA COVID shot that is approved by the US Food and Drug Administration (FDA) and instead trying to use as many unapproved shots as possible.

The email, dated May 25, 2022, with the subject, “MTF Ordering Guidance for Pfizer COMIRNATY-labeled (Tris/Sucrose/Gray Cap) vaccine,” is intended for Certified Surgical Technologists within the military.

The email is designated as HIGH importance.  It states the following:

Now to clarify a few things:

In a May 17, 2022 letter from the FDA to Pfizer regarding the approval of its mRNA shot, the FDA writes that “the licensed vaccine [COMIRNATY] has the same formulation as the EUA-authorized vaccine, and the products can be used interchangeably to provide the vaccination series without presenting any safety or effectiveness concerns.  The products are legally distinct with certain differences that do not impact safety or effectiveness” (emphasis ours).

Many critics, including Dr. Robert Malone, have argued that this legal distinction between these two vaxes is critical.

Namely, Pfizer, along with healthcare providers or institutions who issue or mandate the unapproved EUA-version of the drug, enjoy a liability shield and cannot be sued for damages caused by it.  However, the fully approved version of the shot (the gray cap COMIRNATY label) does not reportedly come with liability protection, which allegedly puts Pharma, the military, and other mandating agencies at risk of litigation should someone become injured by the drug and decide to sue.

Critics also argue that the legal distinction also means that the US government or any other agency or institution cannot legally mandate an unauthorized drug … which hardly explains why so many institutions in this country have.

This legal distinction between the EUA and FDA-approved versions of the Pfizer mRNA jab has been swiftly fact-checked by mainstream media.

In an email to the Washington Post, Pfizer spokesperson Sharon J. Castillo writes that the “legally distinct with certain differences” refers to the differences in manufacturing information included in the respective regulatory submissions” and has nothing to do with liability protection.

She continues, “The liability protections afforded under the [Public Readiness and Emergency Preparedness Act (PREP Act)] are tied to the declared public health emergency and not whether the vaccine is sold under an EUA … Therefore, both Comirnaty and the Pfizer-BioNTech COVID-19 vaccine receive the same liability protections as medical countermeasures against COVID-19.”  In other words, people apparently cannot sue for damages from either the COMIRNATY shot or the EUA shot (but can apply for compensation through a taxpayer-funded program with a poor history of actual payouts for vax victims and their families).

Setting aside the litigation matter for a moment, there’s still an unclear issue:

Why would the US Military urge military treatment facilities to order the approved version of the shot only if “needed due to legal reasons (i.e., mandated)”?

Does this mean that anyone who has forced employees to get the EUA-version of the drug is truly outside their legal bounds?

Even if people can’t sue their employer or Pfizer if they get hurt after taking the “purple cap” mRNA shot, is it possible that they could sue for being forced to take it in the first place, given that it is an unapproved drug?

(NaturalHealth365)  Since the late 1980s, the number of petitions filed with the END_OF_DOCUMENT_TOKEN_TO_BE_REPLACED

(NaturalHealth365)  One of the big talking points of mainstream media, MD influencers, END_OF_DOCUMENT_TOKEN_TO_BE_REPLACED

(NaturalHealth365)  Are we surprised at this point?  Breaking news from the U.S. END_OF_DOCUMENT_TOKEN_TO_BE_REPLACED