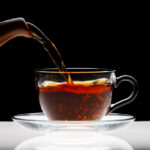 (NaturalHealth365)  Cancer is one of the world’s leading causes of death in adults and children alike.  It doesn’t care about age, race, or gender.  It is an equal opportunity destroyer.  Researchers are continually searching for ways to cure this disease as well as prevent it.

Theaflavins are compounds that are formed in the process of making black tea.  There are no black tea leaves or black tea plants found anywhere in nature.  It actually comes from the process of fermenting green tea leaves.  The theaflavins, or black tea polyphenols, are beneficial for the whole body, supporting better health.  One of the benefits appears to be the ability to fight cancer.

And the evidence supporting it is very strong.

Theaflavin itself is a vital antioxidant as well as a metal-chelating polyphenol.  It is found in other teas like oolong, but black tea seems to be the best concentration.  It is widely popular, the most popular tea in the world.  In fact, 75% of all tea consumed globally is black tea.  And because it is so widely available (and desired), it makes it much easier to get it into the hands of the people who truly need it.

Research has given us a good picture of the role that theaflavins play in fighting cancer.  They interact with the cellular pathways and disrupt the processes that are crucial to the development of cancer and its progression.  By doing this, they make it difficult for cancer cells to spread and survive.

Black tea is believed to have the potential to be an effective cancer therapy because it seems to accomplish the primary objectives of an ideal cancer therapy, such as:

There is a great deal of scientific evidence that supports these theories, building even more evidence to support furthering the research with more human studies in a clinical setting.

Although more human trials are needed, research is promising

There have been a few studies that examined black tea and its effects on cancer.  In one study, men who had prostate cancer and were scheduled for surgery were given either black tea or a placebo drink for five days before their surgery date.  The men who had been given the black tea had significantly higher levels of tea polyphenols in the tissues of their tumors that were removed.

Researchers also extracted cell cultures from the patients that contained blood serum.  They tried to grow prostate cancer cells in those cultures.  In the cultures of the men who drank black tea for five days before they underwent surgery, the growth of the cancer cells was greatly reduced.

The men in the study did not drink outrageous amounts of black tea, nor did they drink an obscure brand of tea.  The tea used in the study was Bigelow Darjeeling Black Tea, and they were instructed to consume 284 mL five times a day, including morning, noon, and evening so that all five drinks were spread throughout the day.

That is fairly easy to incorporate into just about anyone’s daily diet.  And if it means you can potentially beat cancer, isn’t it worth it?

(NaturalHealth365)  Research over the past decade has shown, without a doubt, that END_OF_DOCUMENT_TOKEN_TO_BE_REPLACED

(NaturalHealth365)  More than 4,500 published studies have created a powerful body of END_OF_DOCUMENT_TOKEN_TO_BE_REPLACED

(NaturalHealth365)  Food allergies are all too common in our society.  Many Americans END_OF_DOCUMENT_TOKEN_TO_BE_REPLACED