How vaccinations contribute to autoimmune-autoinflammatory syndrome 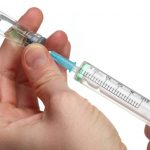 Aluminum adjuvant in vaccinations seems to do the most damage

One of the adjuvants most often used in vaccinations is aluminum. However, aluminum is a known neurotoxin that can cause an array of problematic metabolic reactions. Exposure to even small amounts of aluminum is can lead to numerous neurological disorders and cognitive symptoms. Children receive many times the FDA- allowed amount of aluminum from vaccines administered during their first six months of life.

The autoimmune condition of ASIA was first identified by Israeli doctor Dr. Yehuda Schoenfeld of the Zabludowicz Center for Autoimmune Diseases. However, it has since become so widespread that the 9th International Congress on Autoimmunity created a world registry to keep track of those afflicted by it.

Majority of ASIA cases traced to hepatitis B vaccine

Dr. Schoenfeld says that ASIA symptoms can often take years to manifest. Doctors unaware of the condition often bounce patients around to different specialists in the search for the cause.

Other common vaccines that use aluminum as an adjuvant include hepatitis A, diphtheria-tetanus-pertussis, human papillomavirus (HPV), Haemophilus influenzae type b (Hib), and pneumococcus infection. Vaccines for mumps, measles, rubella, polio, chicken pox, rotavirus and the seasonal flu virus do not contain aluminum.

Genetics a factor in autoimmune response to vaccine adjuvants

Dr. Schoenfeld and his research team determined aluminum and vaccine adjuvants that cause ASIA do so by disrupting the body’s immune system in intricate ways. The damage then extends to endocrine functioning and genetic expression.

These research findings were published in the journal Immunologic Research in 2013. There is also evidence that preexisting genetic factors play a role in whether someone will have a reaction to an aluminum adjuvant. Both aluminum and silicone from breast implants have been named primary causes of autoimmune diseases.

The stated purpose of adjuvants is to “help vaccines work better” by boosting immune response. The CDC website says that aluminum has been used “safely” as an adjuvant in vaccines since the 1930s. However, the surge in ASIA cases indicates that either patients were misdiagnosed in the past, or something in vaccines has changed dramatically for the worse in recent years.

Editor’s note: Click here to get INSTANT access to The Truth About Vaccines and be fully informed about vaccinations, BEFORE it’s too late.

(NaturalHealth365) If you’ve been paying attention to the news recently about vaccines, END_OF_DOCUMENT_TOKEN_TO_BE_REPLACED