Do you struggle with chronic NEGATIVE thoughts? This common problem could be the reason why 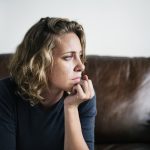 (NaturalHealth365) Have you ever suddenly had unexpected, negative thoughts pop into your mind? While most of us have this unpleasant experience from time to time, these so-called intrusive thoughts are particularly common in people with certain psychiatric disorders.

Now, a new study published in Clinical Psychological Science reveals that a lack of sleep – which is already known to increase your risk of depression – may also make it more difficult to keep these unwanted thoughts at bay.  But, no worries, at the end of this article there is a good resource to help you eliminate the problem.

According to the Anxiety and Depression Association of America, intrusive thoughts are unwanted “stuck” thoughts that seemingly come out of nowhere. They can be incredibly provoking and distressing for the person having them, especially when they are related to socially unacceptable sexual or violent images, as they often are.

Intrusive thoughts are most prevalent among people with certain psychological disorders, including post-traumatic stress disorder, depression, and schizophrenia. But the apparent inability to control your own thoughts is surprisingly more common than you think.

According to 2014 research published in the Journal of Obsessive-Compulsive and Related Disorders, the vast majority of the general population – as many as 94 percent of us – experience unwanted thoughts, images, and/or impulses.

In a new study out of the University of York, a team of researchers has found that poor sleep habits can make this unwanted loss of mental control even more likely to occur.  The researchers randomly divided a group of 60 participants into a sleep group or sleep-deprived group.

In an article published on the University of York’s website, one of the study’s lead authors states: “This study offers an important insight into the impact of sleep on mental health … The study also suggests that the onset of intrusive thoughts and emotional disturbances following bouts of poor sleep could create a vicious cycle, whereby upsetting intrusions and emotional distress exacerbate sleep problems, inhibiting the sleep needed to support recovery.”

Here are three other ways lack of sleep can negatively impact your brain health, according to research

Committing to a full night’s sleep every night is essential for whole-body health, including your brain and cognition.  And if keeping unwanted or negative thoughts away isn’t reason enough to start getting more Zzz’s, consider these other three ways poor sleep can impair your mental well-being:

In other words, you run the risk of a lot more than just being fatigued and moody if you consistently don’t give yourself enough shut-eye.  So, do your brain and your body a favor by maintaining good sleep habits.

Click here for 5 helpful tips to improve your sleep.

(NaturalHealth365)  When a person is identified as having “deep pockets,” the connotation END_OF_DOCUMENT_TOKEN_TO_BE_REPLACED