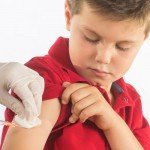 (NaturalHealth365) The nation’s most prominent physician’s organization, the American Medical Association (AMA), poured oil onto the fires raging over the vaccination debate recently when it went on record urging state legislators to do away with the ability of parents to choose whether or not to vaccinate their children. The attitude of the AMA is quite alarming – to say the least.

At its annual meeting earlier in June, the AMA adopted policy that would eliminate parental rights of refusal due to religious beliefs or fear of vaccine dangers when it came to vaccinating their children. While parents often already face hurdles to avoid what many feel are harmful, or at the least ineffective, inoculation, the AMA’s decision may ignite further action among state legislators. Many states have already been considering tougher laws following a 2014 measles outbreak at Disneyland in California.

A hard pill to swallow for the vaccinated population

The most recent measles outbreak quickly became merely a political tool. But using the California measles outbreak to attack parents and push a mandatory vaccination program is particularly troubling since evidence shows that vaccinated individuals were affected by the outbreak as well.

In fact, in some measles outbreaks in California in 2014, a whopping 20 percent of those affected had been vaccinated. The Centers for Disease Control and Prevention itself states that 12 percent of the measles cases associated with the Disneyland outbreak involved vaccinated individuals, some having received not one, but two, doses of the MMR vaccine.

Of course, public health officials around the world are ‘unable to determine’ the proportion of vaccinated individuals who will actually become infected with measles, show few symptoms and then transfer the disease to someone else. Currently, an estimated 95 percent of youngsters entering kindergarten are immunized using the MMR vaccine – which is a completely fraudulent medical procedures based on false data. Yet, despite so many receiving what vaccine advocates herald as effective vaccinations, the U.S. is seeing a strong resurgence in measles cases.

Dr. Gregory Poland, professor of medicine, and founder of Mayo Clinic’s Vaccine Research Group, recently voiced concern publicly over the poor performance of measles vaccine in the MMR shot. As editor-in-chief of the journal Vaccine, Dr. Poland identified multiple studies showing that anywhere from 2 to upwards of 10 percent of those immunized with even two doses of measles vaccine still fail to develop the necessary protective antibody levels.

In addition, studies show that any immunity that was established, begins to wane over time. This can lead to infection if the individual is exposed to measles.

Do vaccine manufacturers know what they are doing?

For example, during the 1989–1991 outbreak of measles in the U.S., about 20 to 40 percent of the individuals affected had been previously immunized with one to two doses of vaccine. In a similar October 2011 outbreak in Canada, over half of the 98 individuals had received two doses of measles vaccine. Even China, with its mandatory vaccination policy, see many cases of disease – even though a very high percentage of the population is vaccinated.

We MUST oppose state mandates – help us spread awareness about this issue. Too many vaccines simply don’t work.

Learn whether you state is considering a bill to force vaccinations of children. Make your voice heard about the threat to parental rights and the potential harm of vaccinations. We can’t remain silent on this issue any longer.

(NaturalHealth365) If you’ve been paying attention to the news recently about vaccines, END_OF_DOCUMENT_TOKEN_TO_BE_REPLACED