Discover the “Mighty Mineral” under-recognized for its lifesaving health benefits 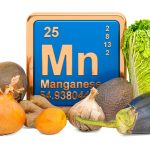 (NaturalHealth365) Most people are aware that certain minerals in the body – such as calcium, potassium, sodium and magnesium – play a vital role in sustaining life and health. Less “top of mind,” though, are essential trace minerals such as manganese, selenium, copper and zinc.  And, although these microminerals are needed in much smaller amounts than the “Big Four,” they also serve indispensable functions in the body.

Manganese, in particular, is responsible for an impressive checklist of life-sustaining functions. In fact, research has shown that this hard-working micromineral can help prevent and even alleviate a surprising range of diseases and conditions. As we take a closer look at the “mighty mineral,” the far-ranging benefits of manganese may surprise you.

Manganese works behind the scenes to protect your health

Manganese is the ultimate “wing-man” in the body, helping to facilitate the contributions of a host of other players.  Specifically, it plays an important role in the metabolism of amino acids, cholesterol, glucose and carbohydrates.

In addition, manganese helps the body utilize a slew of important nutrients, including vitamin B1 (thiamin) – which helps the cells convert carbohydrates into energy – choline, which is needed for brain development, and vitamin C, the antioxidant, anti-inflammatory “muscle” of the immune system.

In combination with calcium, zinc and copper, manganese also supports bone mineral density.  Plus, it helps to synthesize collagen, which is needed not only for healthy skin but for strong, flexible arteries.

Research has also shown that manganese is required for the activation of prolidase, an enzyme essential for wound healing.  Unsurprisingly, low dietary levels of manganese have been associated with serious chronic diseases.

Scientists report that manganese assists in the utilization of biotin, which helps normalize blood sugar. And, early studies have shown that the micromineral could help beta cells in the pancreas produce insulin.

One 2014 Korean study found that people with diabetes had lower levels of manganese than those without the condition.  In another study, mice with diet-induced diabetes were given manganese supplementation for 12 weeks – with promising results. The team noted that the animals experienced improved glucose tolerance and increased insulin secretion, along with a decrease in the harmful oxidation of fats.

While more clinical research is needed, these studies are encouraging.

Studies have suggested that manganese deficiency could be a primary cause of osteoporosis, a condition in which bones become brittle and subject to fracture.

It turns out that manganese helps with the formation of certain hormones and enzymes that are involved in bone building. It also plays an essential role in the synthesis of glucosamine and chondroitin, essential ingredients of cartilage.

And, it may help to prevent and treat another “osteo” condition – osteoarthritis.  One study found that a combination of manganese, glucosamine and chondroitin for four months improved pain and function in people with osteoarthritis of the knee and lower back.

Some studies have suggested that taking manganese in conjunction with calcium, zinc and copper can improve bone mass and reduce spinal bone loss in older women.

The benefits of manganese extend to neurological functions, as well.  This mineral is associated with the activity of the nerve cells of the brain, has been shown in animal studies to improve cognitive function.

While more study is needed, some researchers believe that manganese can improve learning, memory and even mood in humans.  And, it may even play a role in alleviating cyclical mood disturbances in women.

A study published in the American Journal of Obstetrics and Gynecology found that premenstrual women with lower manganese levels experienced more pain, insomnia and mood-related symptoms than those with higher levels.

How much manganese is enough?

While true manganese shortfalls are rare in those who eat a varied, healthy diet, deficiencies can occur in people with chronic digestive disorders that limit absorption.  In addition, a diet poor in manganese-rich foods can cause low levels.

According to the National Institutes of Health, the daily adequate intake for manganese is 2.3 mg for men and 1.8 mg for women.  However, some natural health experts recommend 4 mg a day for maximum benefit.  The tolerable upper limit for manganese is 11 mg a day.

Although manganese in small amounts is vital for health, excessive amounts can be toxic.  If you would like to try supplementation, make sure to discuss the matter first with your qualified integrative doctor.

You can boost your dietary intake of the “mighty mineral” with whole grains – particularly brown rice, which weighs in at a whopping 2.1 mg per cup.  Other good sources include raw pineapple, chickpeas, adzuki beans, pecans, almonds and dark leafy greens.

As far as exceeding the tolerable upper limit by eating these foods, no worries – there is no evidence showing manganese toxicity from high dietary intake.

So, in terms of vitamins and minerals, the benefits of manganese may be somewhat under-appreciated.  But make no mistake: this trace mineral is far too important to be overlooked.