Children 50 times more likely to die from COVID jab than from virus, according to former Pfizer executive 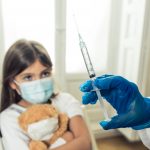 (NaturalHealth365) Pharmaceutical company Pfizer – which is slated to earn several billion dollars in sales of its highly profitable COVID injection – is currently testing its unapproved mRNA drug on children younger than 12 years old, including 6-month-old babies.

As child health advocates worldwide continue to raise questions about this accelerated push to administer the COVID shot to younger populations, a former Pfizer leader has come out with some important statements.

Former Pfizer VP warns that COVID shots are not safe for kids, more likely to cause harm than the disease injection is supposed to protect against

He explains that mRNA gene technology used in the COVID shot to trigger the body to create viral spike proteins is a “fundamental problem” that scientists and researchers have known about for years because these spike proteins can lead to blood clots and other health problems.

This could help explain the large number of adverse events reported to the government’s Vaccine Adverse Event Reporting System (VAERS).  Just in the first half of 2021 alone, Dr. Yeadon says, roughly 5,000 deaths related to the COVID shot have been reported.

“Normally, there’s 200 a year for all vaccines combined,” he adds.

Dr. Yeadon, who describes himself as “very pro-vaccines,” says that these drugs have not been sufficiently tested and that they shouldn’t have been authorized for emergency use when there are safe and effective medicines available for COVID-19.

Is this injection even safe to give alongside DOZENS of other shots already recommended for children?

Under the current immunization schedule recommended by the U.S. Centers for Disease Control and Prevention (CDC), children receive literally DOZENS of injections before the age of 18.  This leaves many parents concerned over whether adding this brand-new type of injection to the list is safe.

The CDC says the COVID shot “may now be administered without regard to timing” of other recommended childhood shots, insisting that it’s okay to administer multiple injections to a child on the same day.  This new stance is thanks to “substantial data” about COVID shot safety, the government agency states.  Yet in the preceding paragraph on their website, CDC states that “data are not available for COVID-19 vaccines administered simultaneously with other vaccines.”

In other words, even though there is currently no data proving whether it’s safe to give COVID shots at the same time or around the same time as other shots, the CDC recommends it anyway.

Wondering how the CDC could make these statements about an unapproved medical product?  The agency says they are basing their recommendations on evidence from non-COVID shots, which suggests drug effectiveness and rates of adverse effects are “generally similar” whether they are administered alone or separately.

The thing is, the Pfizer shot is a brand-new mRNA technology, never before used in humans – let alone young children.

The CDC also admits that it is “unknown whether reactogenicity of COVID-19 vaccine is increased with coadministration, including with other vaccines known to be more reactogenic, such as adjuvanted vaccines or live vaccines.”

Reactogenicity refers to the tendency of an injection to produce adverse reactions – another thing you think officials would want to know more about before telling parents to get their kids injected.

One thing is clear:

Many unknowns remain about the safety of these experimental drugs in young children.  Parents who are not yet sure if the benefits of an experimental drug outweigh the risks should not be made to feel unfit or unwise if choosing not to get their kids injected – they are simply exercising their right and duty to make medically informed decisions for their children.

(NaturalHealth365)  The Wall Street Journal (WSJ), an organization that reports the news, END_OF_DOCUMENT_TOKEN_TO_BE_REPLACED