Jab hesitancy: Generation Z says no to COVID shot at a higher rate than other age groups 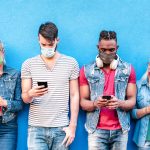 (NaturalHealth365) Talk show hosts, singers, actors, social media influencers, and other celebrities have been campaigning hard to convince young adults to line up for their COVID injection.  Wonder why?

Recent polls indicate this younger group of Americans is simply choosing not to participate in the experimental mass vax program, spurring fear-based warnings from the White House and public health officials about how this could drive SARS-CoV-2 mutations.

No, thanks!  At least 1 in 4 Gen Z Americans declining COVID injection, public officials say this could drive virus mutations

According to recent polls, more than any other age group, Americans aged 18 to 24 (so-called Gen Z) are choosing not to get the experimental mRNA injections.  Not only that, but the number of people in this age group who have decided to defer or decline the shot appears to have actually increased over time.

Several possible explanations for this shift exist – not the least of which is the higher-than-expected rate of heart inflammation among post-jab recipients aged 16 to 24, as reported by the U.S. Centers by Disease Control and Prevention (CDC).

In March 2021, a poll by NBCLX and Morning Consult found that 26% of Gen Z adults have no plans to get the unauthorized shot.  This is significantly up from just 5% who said no back in March 2020 in a poll from the same organization.

Another recent poll from STAT-Harris – which has documented Americans’ declining interest in the COVID shot over the past several months – indicates that over half of 18- to 24-year-olds are not planning to get vaxxed.

In an attempt to sway this younger demographic, public health officials warn that without more people getting jabbed, more mutations of the virus may emerge.  What they fail to mention is that the injections themselves may also trigger viral mutations, in a well-documented phenomenon known as vax “escape.”

As reported in The Lancet, NPR, and others, it is still unknown in the medical and scientific communities if and how many SARS-CoV-2 variants will emerge due to “waning immunity” following injection.

Interestingly, the National Institutes of Health (NIH) recently reported on breaking research that revealed “95% of people who recovered from COVID-19” had “lasting immunity.”  The data came from a study by researchers at the La Jolla Institute for Immunology, who found that natural infection with the (highly survivable) pandemic illness conferred not only a strong immune response but a persistent one.  NIH states this data “provides hope” that jab-induced immune responses will be just as good.

More recent research calls this into question, however.

According to estimates from the NIH and the American Autoimmune Related Diseases Association (AARDA), anywhere from 23.5 to 50 million Americans are living with autoimmune diseases, including type 1 diabetes, lupus, rheumatoid arthritis, and Crohn’s disease.  Autoimmune diseases and drugs used to help people with organ transplants can weaken a person’s immune system.

Now, the NIH is investigating a growing body of evidence that suggests that COVID shots do not protect Americans with weakened immune systems.  In other words, millions of Americans who have already received these drugs are experiencing waning immunity post-jab – or had little to no immunity from the start.

Given what is known about waning immunity and the potential for virus escape, there are clearly some important risks from mass injections that officials must be more diligent about investigating and transparent about reporting.

(NaturalHealth365)  Has the international public health crisis gone from the viral disease, END_OF_DOCUMENT_TOKEN_TO_BE_REPLACED

(NaturalHealth365)  As you may know, SARS-CoV-2, the virus that causes the sickness END_OF_DOCUMENT_TOKEN_TO_BE_REPLACED

(NaturalHealth365)  Ever since the U.S. Food and Drug Administration (FDA) gave the END_OF_DOCUMENT_TOKEN_TO_BE_REPLACED