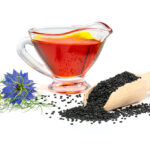 (NaturalHealth365)  For many people in the United States, black cumin seed oil isn’t exactly a household name.  But this nutrient, also known as black seed oil, has an illustrious history dating back over 3,500 years.  It was reportedly revered by ancient Egyptians – who believed it could treat coughs, colds, digestive issues, and even bubonic plague – and was advised by Greek physician Hippocrates, the “Father of Modern Medicine,” for its anti-aging and health-promoting benefits.

Now, modern scientific research has identified powerful antioxidants and therapeutic compounds in black cumin seed oil, which is made from the seeds of the Nigella sativa shrub.  A study showcases black seed oil’s ability to promote joint health and ease joint pain, while other recent reviews have recognized its anti-allergy and heart-healthy effects.

Compound in black cumin seed oil can quench inflammation and soothe joint aches and pains
In a 2019 study published in Biomedicine and Pharmacotherapy, researchers found that thymoquinone, a constituent of black seed oil, decreased the expression of toll-like receptors in the body, thereby helping to suppress the release of inflammatory substances such as interleukin-1.

Noting that thymoquinone helps to modulate the immune system, the scientists added that it inhibited bone erosion and reduced pain and swelling in participants with rheumatoid arthritis– without showing any signs of toxicity to the liver and kidneys.  And this isn’t the only research showing joint benefits for black cumin seeds.  In one placebo-controlled study, 42 patients with arthritis were given 1,000 mg a day of powdered black seed for eight weeks – and experienced reduced inflammation and oxidative stress.

In addition to its powerful immune system-boosting, antioxidant and anti-inflammatory qualities, black seed oil has bronchodilatory effects, meaning that it widens the airways and facilitates free breathing.  Black seed oil has been shown to benefit hay fever, with one study in the Journal of Pharmacopuncture showing that four weeks of supplementation reduced nasal congestion, runny nose, and sneezing.

Black seed oil nasal drops have also been shown to ease hay fever symptoms – as well as boost participants’ ability to tolerate exposure to allergens.  In one review, the authors noted that thymoquinone in black cumin seed oil significantly improved symptoms in participants with asthma.  If seasonal allergies are getting the best of you, black cumin seed oil may be able to help.

Black cumin seeds (from which the oil is made) are also known as black seeds, black caraway, nigella seeds, fennel flower, and Roman coriander.  To make sure that what you are getting is black cumin seed oil, check the label to be sure it is made from Nigella sativa seeds.  As always, opt for a high-quality product from a reputable vendor.  (Pro tip: you can also incorporate black seed oil into sauces, curries, and salad dressings).

Natural healers typically recommend one-half to one teaspoon of black cumin seed oil daily.  Before supplementing, however, check with your integrative doctor.  While few serious side effects have been noted, some patients have reported digestive problems such as nausea and bloating.

By the way, black seed oil may also support efficient kidney and liver function, protect cognition and memory, soften and moisturize skin and promote healthy weight.  With an accumulating body of evidence highlighting its benefits, black cumin seed oil may be beginning to receive the credit it deserves.

(NaturalHealth365)  More than 4,500 published studies have created a powerful body of END_OF_DOCUMENT_TOKEN_TO_BE_REPLACED

(NaturalHealth365)  Food allergies are all too common in our society.  Many Americans END_OF_DOCUMENT_TOKEN_TO_BE_REPLACED