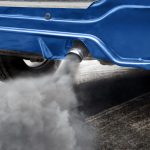 (NaturalHealth365)  We have been driving cars for over 100 years.  While there were many known risks, such as carbon monoxide poisoning and potential injuries due to crashes, very few people made the connection between lead gas and intellectual damage.

It’s now being proven that carbon monoxide was not the only poison coming out of the exhaust pipe.

Toxic substance in car exhaust poisoned millions – why were we not warned?

Up until 1996, leaded gasoline was still in use.  As a neurotoxin, lead erodes brain cells.  When young children are exposed either through car exhaust or any other method, it can dramatically hinder brain development and impair cognitive ability.

The longer a person is exposed, the more damage they will suffer.  Even adults can experience damage in terms of cognitive function and the ability to think clearly.  An extended exposure can lead to permanent damage.

Here is how lead in car exhaust exerted its damaging effect

When leaded gas was burnt in a car’s engine, lead particles ended up in the exhaust.  These particles could then be inhaled into the body.  Once lead has made its way into the bloodstream, it can easily cross the blood-brain barrier where it can eventually cause damage to the brain.

In the 1950s, 60s, and early 70s, not much thought was given to car exhaust other than the high levels of carbon monoxide produced.  Studies now show that over 170 million Americans may have experienced some degree of lead toxicity from breathing in excessive amounts of lead through car exhaust fumes.

Lead was removed from gasoline in 1996 for environmental reasons.  Even though it was widely known that lead was toxic even in the smallest amounts if it was ingested, in the 1960s and 1970s, health authorities paid little to no attention to lead exposure through car exhaust.

Now that it is finally being investigated, many people are quite shocked as to the extent of exposure that has been uncovered.  Scientists are still trying to uncover the true extent of the damage.  It is quite apparent that there is reason to believe many Americans experienced some degree of intellectual deterioration.

The studies that have been performed over the past few years have been able to give researchers a good idea of the long-term impact of lead exposure on intellectual health.  One thing that has been beneficial in curtailing some of the damage is the push to include antioxidants in the diet.

Boosting your immune system, sufficient exercise, and the right amount of sleep are all basic components of a healthy lifestyle.  While these things may not be able to reverse any previous damage, they can work to improve your overall health and lessen the impact that lead and other free radicals have on your body and your brain.

Eat fresh (organic) foods in their natural state.  Exercise regularly, better yet, be sure to move your body every single day.  Sleep well.  Most importantly, be mindful of your environment and avoid things you know will put you at risk.

(NaturalHealth365)  According to the American Association of Endodontists, more than 25 million END_OF_DOCUMENT_TOKEN_TO_BE_REPLACED