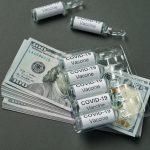 (NaturalHealth365)  Do you find it to be a conflict of interest for an agency that monitors product safety of drug companies to be widely funded by the very companies they are supposed to oversee?

Recent reports reveal that this is exactly what the U.S. Food and Drug Administration (FDA) is doing but that a significant percentage of its budget comes directly from Big Pharma … with Pfizer proving to be a major funder.

According to Pharmaceutical Technology, $2.8 million certainly doesn’t sound like a lot of money for a company like Pfizer, who enjoyed a jaw-dropping 92% growth in revenue last year, raking in $81.3 billion in 2021.  But that’s still a lot of money to fork over to a company Pfizer depended on to have their COVID shot COMIRNATY fully approved.

The revelation of the $2.8 million-transaction between Pfizer and FDA was revealed in one of the several dozen documents released by the FDA in response to a recent court order, which demanded the FDA to release 55,000 pages per month of Pfizer clinical trial data to the public (which is a significantly faster rate than what Pfizer and the FDA originally hoped for).

It goes without saying that a $2.8 million check is large enough to be missed by the FDA had they decided not to approve Pfizer’s drug.

As for the rest of FDA’s funding, a June 2021 report from the Congressional Research Services, called The Food and Drug Administration (FDA) Budget: Fact Sheet, reveals that “Since the enactment of PDUFA in 1992, FDA’s spending from user fees has generally increased, both in absolute terms and as a share of FDA’s total budget, accounting for over 45% of the agency’s FY2020 total program level.” PDUFA refers to the Prescription Drug User Fee Act, a law passed by U.S. Congress that allows the FDA to collect fees from drug manufacturers in order to fund the drug approval process.

You read that right: nearly HALF of all of the FDA’s budget comes from the drug companies that they are supposed to monitor.

Financial conflicts of interest are nothing new in research … will the government start being more transparent, too?

The U.S. Department of Health and Human Services defines financial conflict of interest (FCOI) as a situation in which “the recipient’s designated official(s) reasonably determines that an investigator’s significant financial interest could directly and significantly affect the design, conduct, or reporting of [research.].”

Such conflicts of interest also appear to be much more common than people may realize.  A recent systematic review published in April 2021 in Mayo Clinic Proceedings: Innovations, Quality & Outcomes found that among 37 studies investigating clinical practice guidelines, nearly half (45%) had at least one FCOI and that the prevalence per study ranged from 6% to 100%.

Will the government ever be forthcoming about its own financial conflicts of interest and convoluted ties with Big Pharma and Big Food?  Why are people labeled as “anti-vaxxers” simply for bringing up the very real, prevalent, and pertinent issue of financial conflicts of interest?  And if people are so willing to “follow the science,” shouldn’t they at least also “follow the money” to add context to the data being used?

(NaturalHealth365)  The Wall Street Journal (WSJ), an organization that reports the news, END_OF_DOCUMENT_TOKEN_TO_BE_REPLACED