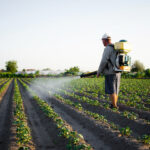 (NaturalHealth365)  The food we eat should keep us healthy and strong.  But unfortunately, many foods today contain harmful substances – some of which may not even be on the ingredient list.

One such substance is glyphosate, a dangerous chemical that disrupts multiple functions within the body.  According to recent findings, glyphosate in food may be even more pervasive than scientists feared.

Why glyphosate is terrible news for your body

Glyphosate is an ingredient found in weed killers, including Roundup, linked to several types of cancer.  As if that weren’t bad enough, it can also interfere with important natural processes.

For instance, exposure to this chemical can negatively impact your ability to create fully functioning proteins.  The herbicide ingredient may also affect your thyroid, your gut microbiome, and the activation of vitamin D.  These are just a few of the detrimental effects of glyphosate.

How widespread is toxic glyphosate in our food?

If glyphosate is so insidious, why and how does it end up in our food supply and, consequently, our bodies?  It was previously thought that mainly genetically engineered foods were contaminated with the substance, but the problem goes much further than that.

Most crops, even some organic ones, may be contaminated with this toxic weed killer.  Alarmingly, a high number of common breakfast cereals contain unsafe levels of the chemical.  It’s also found in oats, a popular children’s nutrition drink, and pea protein powders.  Sadly, it also contaminates the environment, some vaccines, and breast milk.

Why is this chemical so pervasive?

The reason for the omnipresence of glyphosate may be linked to its use as a desiccant in crop harvesting because it can shorten the time it takes for crops to harvest and make them dry out.

Unfortunately, glyphosate is not the only desiccant used in farming, nor the only problematic one.  Another desiccant, paraquat, may result in Parkinson’s disease.  In addition, many plant foods, such as legumes, grains, and vegetables, contain plant lectin – which is harmful when mixed with paraquat.

Lectins can cause inflammation, endocrine disruption, and nerve damage.  But when they’re combined with the desiccant paraquat, the effects only increase.

Studies suggest troublesome links between glyphosate, other desiccants, and severe health consequences.  In fact, the European Union banned paraquat in 2007.  Yet, it’s still legal in the United States.

How to minimize your exposure

If these toxins are so widespread, how can you take steps to protect yourself from them?

While it’s true that even some organic foods may contain glyphosate, buying organic is still your best bet.  These foods are far less likely to be as contaminated with the ingredient.  Remember, desiccants are not limited to GMO foods.

Choosing organic when consuming beans, legumes, and potatoes is especially important, as they have high lectin content.  You might go a step further and only buy from local, organic farms or grow your own food.

The bottom line is that none of us may be able to completely avoid toxic chemicals in food … but we can try.  If you buy organic, local food, you will minimize your risk of glyphosate exposure.

(NaturalHealth365)  In the latest episode of the environmental toxins saga, newly-published research END_OF_DOCUMENT_TOKEN_TO_BE_REPLACED