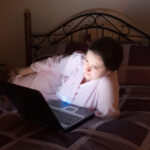 (NaturalHealth365)  The blue light from your smartphone screen, computer screen, and TV poses a direct threat to your health and wellbeing.  Smartphones and computers are considered necessities for modern living, yet they also compromise visual acuity, social skills, health, and vibrancy.

In fact, a recent study by Dr. Jadwiga Giebultowicz with the Oregon State University Department of Integrative Biology details how blue light emanating from screens hastens the aging process.

It wasn’t long ago when people primarily interacted with one another in person or over the phone.  The transition from the pre-internet days of the 80s and early 90s to modern life has been characterized by technological progression, social destruction, moral regression, and obesity.  Such is our progress paradox, as eloquently described by Greg Easterbrook.  However, most people fail to realize that it is tech itself, rather than advances made by food scientists, causing the obesity epidemic here in the United States and across the globe.

Excessive exposure to blue light from smartphones and other screens is causing rapid aging, obesity, and even mental health problems.  The truth is smartphones, the internet, video games, and TV are addictive.  Brain wave scans reveal similar patterns between TV watchers and those asleep.  Blue light is the salt in the wound created by our tech dependence.

The study referenced above details how an abundance of blue light exposure compromises cells within the entirety of the body, ranging from those all-important sensory neurons for information processing to fat cells, skin cells, and more.  Though the study centers on how blue light impacts fruit flies, the results likely translate to human beings and other animals.  Specifically, the study is the first to reveal how certain metabolite levels, meaning chemicals necessary for cellular functionality, mutate after exposure to blue light emanated by screens.

Though it is nearly impossible to completely eliminate screens and blue light from your life, it is in your interest to minimize such exposure to the best of your ability.  The researchers referenced above found screens from light negatively affected flies’ chemicals used for signaling.  The study results are worrisome as such signaling chemicals within flies are similar to those of humans.  In particular, high-energy blue light hastens fruit fly aging, especially when juxtaposed with a control group of flies that remained in darkness for two full weeks.

The study results show that fruit fly cells failed to function optimally after subjection to blue light from screens.  It is possible that such cell malfunctions will cause premature death.  In particular, glutamate decreased while succinate – a metabolite necessary for cellular functionality – increased.  Excessive levels of succinate following blue light exposure are problematic as it prevents neuron communication.

The blue light emanating from screens is omnipresent.  Even if you venture outside your home, you will likely be subjected to blue light from screens in the form of LEDs within monitors, work computers, others’ phones, ambient lighting, and more.  However, you have the agency necessary to minimize exposure to blue light and ultimately slow the aging process.

Resist the temptation of smartphones, computer screens, and TV screens after work.  Consider wearing blue light-blocking glasses when you spend time on blue light-emitting devices.  Spend more time outdoors, and you will slow the aging process while rebalancing yourself with nature.

(NaturalHealth365)  Every 34 seconds in the United States, somebody dies of heart END_OF_DOCUMENT_TOKEN_TO_BE_REPLACED