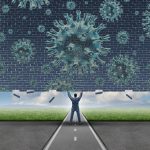 (NaturalHealth365)  After two years of psychological warfare tormenting the global population under the guise of the COVID-19 pandemic, more and more critically-thinking Americans are beginning to awaken to the realization that the Corona panic is a scam.  That’s the good news.  Many have successfully put the puzzle pieces together and clearly see that the pandemic was a carefully orchestrated, masterfully executed series of events that are part of a much bigger plan – to usher in unprecedented control over humanity.

The bad news is that despite the mounting evidence supporting the validity of the above statements, many people remain under the spell of government propaganda and dismiss such claims as far-fetched conspiracy theories.  However, a recently released video provides indisputable evidence that the COVID-19 pandemic was planned and part of an evil agenda.

On May 4th, 2022, Stopworldcontrol.com released a powerful video titled The Plan that puts the spotlight on the perpetrators.  The video provides irrefutable proof that “Covid-19 is a false pandemic created for political purposes.”  A Dutch virologist from the World Health Organization (WHO) shamelessly admits that “Yes, this has been in the WHO’s ten-year plan for some time.  That plan says that there will be a major infectious disease crisis.  Well, this was year one.”

It will blow your mind to learn who was involved in crafting this sinister plan and how they pulled it off.  Watch The Plan now (below) … it’s 30 minutes that will forever change your perspective about what’s going on here:

PLANNED: Hundreds of millions of COVID-19 test kits were distributed worldwide years before the pandemic

According to the official narrative, the COVID-19 virus outbreak appeared unexpectedly at the end of 2019.  First, we were told SARS-CoV-2 was transferred to humans from infected bats from a nearby wet market.  Then the story changed, and the Wuhan-based biological lab became the accepted source of origin.  But, most importantly, officials told us that the outbreak was a complete surprise.

In September 2020, data surfaced showing that in 2017 and 2018, countries – including the United States – imported hundreds of millions of COVID-19 test kits.  The damning information was published on the World Integrated Trade Solution’s (WITS) website.  Shortly after this information went viral on social media, the WITS tried to cover up this data, but the proof can still be found on the web archive (see link below).

Many other strange events occurred in the years leading up to 2019, proving the outbreak was planned long before the WHO announced it to the world.  Here are some of the most notable ones:

Coincidence?  Hardly so.  It is not hard to see that we have been lied to.  But, even worse than that, we may have been programmed well in advance to accept the current events.

Not so coincidentally, in the past few years, several movies and TV series have portrayed a global coronavirus outbreak with striking similarities to what we are going through today.  Interestingly, in the film, Dead Plague, hydroxychloroquine was the cure, and in the film Contagion, social distancing, face masks, and lockdowns were used to slow the global spread of the virus.  One must wonder … is this by design?  Could this be predictive programming?

According to an article published by Ohio State University, predictive programming is “a theory that the government or other higher-ups are using fictional movies or books as a mass mind control tool to make the population more accepting of planned future events.”

What do you think?  Did the government use predictive programming to increase our acceptance of the COVID-19 pandemic mitigation measures?

It’s time to stand up to tyranny.  Here is what you can do

Thousands of courageous doctors and lawyers around the world have joined the freedom movement that is spreading like wildfire across the globe, exposing the “greatest crime in history.”  But time is running out.  We must all do our part.

Download the documents referenced in the video on the stopworldcontrol.com website and share them far and wide.  Be sure to include a link to this article and help your friends and family learn the facts they will never hear from mainstream media channels.

Inaction is no longer an option.  Together we can stop the Orwellian future from becoming our reality.

(NaturalHealth365)  The Wall Street Journal (WSJ), an organization that reports the news, END_OF_DOCUMENT_TOKEN_TO_BE_REPLACED