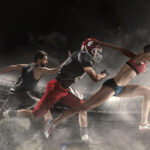 (NaturalHealth365)  As time progresses, more people are waking up and realizing that the mainstream media glosses over the truth in favor of a self-serving narrative.  Now that athletes, entertainers, and other celebrities are suddenly dropping dead at relatively young ages, more people are questioning the narrative that the COVID jab is completely safe.

Do your due diligence by seeking out alternative media sources, and it won’t take long to make your way to the truth: cardiac arrest rates are increasing among those who are healthy and in good shape.  While these tragedies should make headlines, local and national news channels do not talk about what needs to be brought to light.  Why?  Because Big Pharma companies control not only what ads are shown to the public but also what is being said between those commercials and presented as “news.”

Mainstream media is complicit in crimes against humanity

Corporate media, including companies such as Sinclair Broadcast Group that control the mainstream news narrative, are going to great lengths to conceal the truth about the coronavirus shot.  Nor will state and federal governments shine a spotlight on the truth about the vax.  Therefore, it is up to you and other justice vigilantes to search for the truth and take appropriate action.

Do some digging, and you’ll find more than 1,000 fit and healthy athletes have died suddenly after receiving the COVID jab.  Nearly 1,600 athletes have suffered cardiac arrests or other serious health issues related to the vax since the coronavirus injections began almost three years ago.  Critical thinkers are quick to point out that these figures are likely less than the actual number of adverse health outcomes and deaths resulting from the jab simply because many such adverse events are not connected to COVID injections for political reasons.

Brave doctors are beginning to speak out and raise the alarm about the possible explanation for the increased number of sudden death.  Watch the video to hear Dr. Scott Jensen’s explanation for what’s wrong with our hearts.

Cardiologists and scientists across the globe are worried about the hike in sudden deaths, heart attacks, strokes, and irregular menstrual cycles in healthy individuals across the world, yet the mainstream news media have silenced their voices.  In addition, the fact that government power brokers at the state, federal and international levels refuse to acknowledge the medical community’s growing outcry regarding the COVID shots’ safety adds much more salt to the wound.

Rewind to late December of 2021, 1,598 athletes suffered cardiac arrest or other serious health issues after receiving the vax.  Good Sciencing also reports 1,101 of those unfortunate individuals passed away.  By the end of the summer, the number of cardiac arrests and other serious health issues numbered 1,249.  Exactly 847 of those individuals passed away, possibly due to the COVID shot.  Do the math, and you’ll find 254 individuals who were healthy and in top-notch shape passed away between these two temporal benchmarks.

The deaths of soccer players, often referred to as football players, resulting from cardiovascular problems increased by 100% every three months dating back to 2021 when Big Pharma’s injection campaign first launched.  The number of soccer players who died suddenly in December of 2021 was the same as the yearly average across the previous dozen years combined.  Continue to crunch the numbers, and you’ll find sudden deaths of professional soccer players in 2021 were 400% greater than the average rate in the preceding decade.

Spread the word about the dangers of COVID shots

The rapid rise in adverse health outcomes is unique to our post-COVID injection society.  Put two and two together, and you’ll quickly discern the COVID shots are causing heart attacks, myocarditis, strokes, and sudden deaths at an alarming rate.  You can do your part to return America to its pre-pandemic glory by spreading the word about the threat posed by COVID shots, building local coalitions, and supporting politicians who voice criticism of Big Pharma.

(NaturalHealth365)  The Wall Street Journal (WSJ), an organization that reports the news, END_OF_DOCUMENT_TOKEN_TO_BE_REPLACED