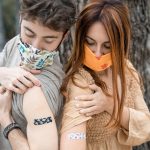 Several studies exploring COVID injection “shedding” confirm these concerns.  Even those who have not gotten the vax but are in close contact with someone could be exposed.  If someone in your household or someone you work with, carpool with, or spend time in close physical proximity with has gotten the COVID shot, you may not be as vax free as you think.

ALARMING evidence suggests COVID-19 shots may be harming the unvaxxed

The idea of injection shedding is not new.  Scientists have suspected it since the early days of the vax development.  For the most part, it was denied by “experts” who jumped up to tout the benefits of a vax while downplaying any concerns about its effects on the human body.

As scientific evidence of not just injection shedding but also the detrimental health consequences that are associated with the COVID injection, it’s getting harder and harder to deny.

The children in those households had readily detectable evidence of elevated SARS-CoV2-specific lgG.  In other words, they showed distinct evidence of COVID-19 injection shedding.

Other studies have examined the dangers and concerns of the COVID injections.  For example, one Japanese study tested the effects of the Pfizer injection on rats and found that it accumulates in the organs.  This study measured the accumulation at several points over 48 hours.  The highest concentration was in the liver, but concerning amounts were also found in the ovaries and the salivary glands and the pancreas, plasma, spleen, and lymph nodes.

Scientists do not know if the accumulations continue in the body beyond 48 hours.  They also do not know how long it remains – or if it ever leaves.

In confidential documents, Pfizer admitted that it is possible for a person who has had the mRNA Covid injection to expose another human being to it by simply touching the skin or breathing the same air as the person.

Dr. Philippe van Welbergen, Medical Director of Biomedical Clinics, began warning people early on because of his own findings regarding the injections.  According to Dr. Welbergen, his vaxxed patients began complaining of dizziness, chronic fatigue, memory problems, and some reported paralysis.  He even had female patients in their 60s who experienced a late onset of heavy menstruation. So he took blood samples as part of his examination.

What he found was alarming.  The blood of these patients contained many damaged cells and had unusual structures that resembled tubes.  There were actually very few healthy cells visible in the blood.  He had not seen anything like this before.

He obtained other blood samples from unvaxxed patients with similar results, showing that they had been infected with toxins from the vax through shedding.  Graphene is also being transferred, and it is destroying red blood cells that cause blood clots in those who have not been injected.

The large body of scientific evidence that points to a very strong likelihood that the COVID shot is prone to shedding tends to overshadow the voices of the powers that be.  The evidence is stacking up to support the claims that the injection carries some serious health concerns and they can be passed on to the unvaxxed.

Now, shedding is not a new concept.  Other viral vaxes shed, including those for chickenpox, rotavirus, flu (intranasal), MMR, and shingles.  Any shedding is not desirable.  It is important to be mindful of the people around you, especially parents who need to be careful who their children are around.  Avoiding the recently vaxed who may be shedding seems like the most logical recourse, but it isn’t always easy to know.

(NaturalHealth365)  Since the late 1980s, the number of petitions filed with the END_OF_DOCUMENT_TOKEN_TO_BE_REPLACED