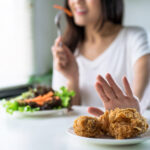 (NaturalHealth365)  According to the Centers for Disease Control, a shocking 73 percent of American adults are currently either overweight or obese – setting the stage for soaring rates of type 2 diabetes and nonalcoholic fatty liver disease.  In addition, experts report that the incidence of major depression – with symptoms of fatigue, anxiety, and insomnia – is on the rise in the United States as well.

What could be behind this epidemic of less-than-optimal physical and psychological health?  Many researchers believe that low levels of serotonin – a neurotransmitter needed for normal appetite, restful sleep, and stable mood – can play a role.  Recent studies highlight the potential of a natural compound, 5-HTP, to enhance serotonin and promote well-being.  In fact, a 2020 trial suggested that 5-HTP could help ease symptoms of depression – while other research has showcased its ability to encourage healthy eating habits.  Let’s take a closer look at some of the possible benefits of 5-HTP.

5-HTP, or 5-hydroxytryptophan, is made in the human body from tryptophan, an amino acid found in various foods, including poultry, milk, and bananas.  (Unlike tryptophan, 5-HTP does not exist naturally in food.  5-HTP supplements are derived from an African plant known as Griffonia simplicifolia).  After animal studies showed that 5-HTP appeared to reduce depression-induced excessive food intake, researchers began studying its effects on humans.  In a 2017 study published in Brain and Behavior, participants were given either 5-HTP or vitamin C before undergoing MRI scans – and the results were fascinating.

The researchers found that a “brain response for protein-rich foods” was more likely to occur in the 5-HTP group.  In other words, the 5-HTP appeared to stimulate an inclination for healthier fare!  (High-protein foods are more likely to help a person maintain a healthy weight than other choices, such as sugar- and fat-laden processed foods).  Another controlled study showed that four weeks of using a 5-HTP oral spray led to greater feelings of fullness for overweight female participants, allowing them to decrease food intake and exhibit small but statistically significant reductions in body mass.

The good news: While it’s by no means a “silver bullet” against obesity, 5-HTP may suppress appetite and reduce cravings for unhealthy foods, thereby helping to support a weight loss journey.

Low levels of serotonin (also known as the “feel-good” chemical) have been linked to depression and anxiety – leading some experts to speculate that serotonin-producing 5-hydroxytryptophan can help address these problems.  In a recent controlled trial published in the European Journal of Neurology, researchers found that 50 mg of 5-HTP daily for a month caused significant improvements in depressive symptoms when compared to placebo.

In fact, some researchers even maintain that 5-HTP may work as well as prescription medications to treat patients with mild-to-moderate depression. 5-HTP is believed to be particularly useful for patients who are resistant to pharmaceutical drugs or who have problems tolerating the side effects.  Another “plus” for this calming compound is its ability to affect serotonin levels swiftly – unlike prescription antidepressants, which can take weeks to reach full effectiveness.

Serotonin can be converted in the body into melatonin, a hormone important in regulating sleep.  As 5-hydroxytryptophan spurs serotonin production, scientists believe it may enhance melatonin levels as well.  While more research is needed, one promising 2018 study examined the effects of a combination of 5-HTP and GABA (gamma-aminobutyric acid, a neurotransmitter with calming effects).  The team found that the combination helped to induce sleep, enhance sleep quality and support longer sleep duration – all encouraging findings for those struggling with insomnia and sleep disturbances such as night terrors, interrupted sleep, and sleepwalking.

By the way, 5-HTP may also help reduce the frequency and severity of migraine headaches and relieve the muscle pain, sleep problems, and fatigue that can accompany fibromyalgia.

Opt for a high-quality formulation from a reputable vendor.  The label should clearly display a USP or NSF seal, which ensures that the product is free of impurities.  Natural healers typically recommend 5-HTP amounts ranging from 50 mg to 400 mg a day – but consult your integrative physician before supplementing.  (Important: Don’t attempt to treat depression, or any other condition, with 5-HTP unless you are under the guidance of a qualified physician.  It may interact negatively with certain antidepressants and sedative medications, increasing the amounts of serotonin in the body to excessive levels).

While researchers are still investigating the effects of 5-hydroxytryptophan, some users swear by its ability to promote sleep, regulate appetite, soothe anxiety and promote a calm, stable mood.  This intriguing natural supplement certainly deserves further exploration.

(NaturalHealth365)  Horsetail – a tall, shaggy weed that grows in wetlands and END_OF_DOCUMENT_TOKEN_TO_BE_REPLACED

(NaturalHealth365)  Menopause is a natural part of getting older, signaling the end END_OF_DOCUMENT_TOKEN_TO_BE_REPLACED

(NaturalHealth365)  According to the American Association of Endodontists, more than 25 million END_OF_DOCUMENT_TOKEN_TO_BE_REPLACED