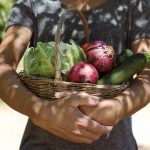 (NaturalHealth365)  For decades we’ve known that pesticides and agriculture are a deadly combination.  Over the years, the government has passed regulations that make it look like they are making an earnest effort to “clean up” our food when, in fact, they are simply exchanging one pesticide that has come onto our radar and garnered a lot of attention for another that is more obscure.

The less you know, the more you will accept.  Your government is riding on the hope, the assumption, that the people are largely uninformed – and they’re absolutely correct.  The truth is, pesticides have made their way into not only the crops but also the animal herds.  And the effects are long-lasting as well as devastating.

The pesticide treadmill is real, and it is detrimental to your health.

What is the “pesticide treadmill” and why is it detrimental to your health?

The pesticide treadmill is a trap that gets farmers caught up in a vicious cycle of pesticide use.  They begin innocently enough with minimal product.  That doesn’t last long, though.  As weeds and insects develop resistance to pesticides, the farmers must use a higher quantity and more toxic chemicals to maintain control.

The resistance that insects and weeds develop due to pesticide use breeds superbugs and superweeds which do not respond to the chemicals being used.  When this happens, and farmers begin seeing it in their crops, they use more potent chemicals like 2,4-D, linked to reproductive problems, brain damage, and several types of cancer.

To put this into perspective, farmers in the United States in the 1940s lost 7% of their crops to pests.  Today, that number has increased to 13% despite the increased use of pesticides.  It is estimated that since 1945 as many as 1,000 weed and insect species have developed a resistance to pesticides.

The sad truth is that this is entirely unnecessary.  There are several alternatives available for managing garden, lawn, and home pests without harmful, toxic pesticides.

But wait, the damage does not stop there!  Pesticide use leads to MANY serious problems

These chemicals have been linked to a number of health problems, an increased risk of death, and birth defects.  These chemicals are seeping into our water, soil, and food chain.  There isn’t much that pesticides haven’t touched.

And that’s a problem.

The U.S. Geological Survey conducted tests on rural waterways and found that pesticides contaminated more than 61% at high enough levels that it was harmful to the aquatic life there.

In the soil, pesticides decrease microbial diversity, which destroys the organic matter that holds water in the soil, increasing the farmland’s resiliency to drought.

And if that isn’t enough, this pesticide problem is not only confined to the farms using the chemicals.  The chemicals can also find their way onto other farms via water runoff and other ways.  So even farms that are not caught up in the pesticide treadmill are still affected.

One of the best ways to escape the effects of the pesticide treadmill is to turn to small, local farms instead of massive commercial farms.  These farms use cottage gardening, a small-scale plan that uses smaller plots of land for farming.  As a result, it is easier to manage, and pesticide use, if any, is on a much smaller scale.

While there are companies out there developing alternatives and products that may help break that cycle, they still have a way to go.

Today, your best bet is to look to the small, local farmers to get your food.  You have a better chance of staying pesticide-free that way.