Can exercise slow mental aging? The answer may surprise you 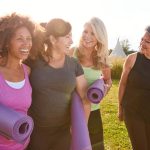 (NaturalHealth365)  For the 6.2 million Americans currently affected by Alzheimer’s disease, the condition can be truly debilitating – interfering with judgment, distorting personality, erasing precious memories, and torpedoing the potential of many seniors to live independently.  While pharmaceutical treatments for Alzheimer’s disease and dementia have yielded disappointing results, brand-new research – involving a simple, natural intervention – might provide a ray of hope.

In a just-published study from UC San Francisco, researchers examined the potential of regular physical activity to maintain healthy cognition and memory in elderly individuals.  Let’s look at the encouraging findings.

The study, published last month in the journal Alzheimer’s and dementia, involved the postmortem examination of 404 elderly patients from the Memory and Aging Project at Rush University in Chicago.  The project had tracked the later-life physical activity of the participants, who had agreed to donate their brains after death.  The scientists found that the patients who had stayed physically active had more of a certain type of protein that enhances the connections (or synapses) between neurons – promoting healthy thought processes and memory and allowing participants to maintain cognition late in life.

Lead author Kaitlin Casaletto, PhD, a neuropsychologist at the Weill Institute for Neurosciences, announced that the research was the first to use human data to show that synaptic protein regulation was linked to physical activity.  Even more significantly, the synaptic improvements were responsible for beneficial cognitive outcomes.  Not only that – but they could potentially ward off dementia, Dr. Casaletto noted.  “Synaptic health can support the brain against Alzheimer’s disease,” she concluded.

Researchers believe that a pair of proteins – amyloid and tau – are deeply implicated in the development of Alzheimer’s disease.  But, the true science behind this theory has yet to prove it.  In fact, there are some experts that say these proteins might be trying to protect the brain from toxic substances.

Having said that, amyloid proteins can accumulate in the brain, causing cellular dysfunction and cell death, while tau proteins can form harmful neurofibrillary “tangles.”  But, the study showed that having higher levels of “presynaptic proteins,” such as synaptophysin, led to good synaptic connections.

By the way, it turns out that a synapse is more than just a “connection” between neurons.  It is actually the site where the process of cognition occurs, Dr. Casaletto explained.  In addition, the presynaptic proteins brought about by exercise help shield the brain from the damaging effects of amyloid and tau.  Even when the brains of deceased individuals were laden with pro-inflammatory amyloid, and tau proteins, the protective impact of exercise could still be seen.

Clearly, the study makes a case for the merits of exercise in preserving cognitive ability.  Of course, scientists already credit regular physical activity with a “laundry list” of benefits.  In addition to improving synaptic function, regular exercise can help alleviate oxidative stress, inflammation, and mitochondrial dysfunction, setting the stage for Alzheimer’s disease and other forms of dementia.  And regular exercise can also help reduce both depression and obesity – additional risk factors for Alzheimer’s disease.

Just about every health expert will suggest 30 to 60 minutes of aerobic exercise – such as power walking, jogging, or biking – several times a week to help maintain reasoning and learning skills, sharpen memory and possibly delay the onset of Alzheimer’s disease and age-related cognitive decline.  Before you begin a new workout routine, though, consult your integrative physician or a health coach – who can help you find a program that’s right for you.

Nutrients and supplements that promote cognitive function and accurate memory include rosemary, ginkgo biloba, lion’s mane mushrooms, acetyl-l-carnitine, Panax ginseng, vitamin C, curcumin, and omega-3 fatty acids, such as EPA and DHA found in fish oil.  In addition, B vitamins – particularly vitamin B12, vitamin B9 (folate), and vitamin B3 (niacin) – can help break down homocysteine, a pro-inflammatory amino acid implicated in poor heart function.  As always, though, check with your trusted integrative doctor before supplementing.

Generally speaking, the Mediterranean diet – featuring antioxidant spices, healthy monounsaturated fats such as olive oil, fruits, vegetables, legumes, nuts, and limited amounts of high-quality protein – has been linked to a reduced risk of Alzheimer’s and other neurodegenerative conditions.  (It has also been associated with a lower incidence of heart disease as well as longer life – so many healthcare providers suggest this healthy way of eating is a win/win).

Of course, getting sufficient sleep, managing stress through natural methods, staying well hydrated with pure, filtered water, and reducing exposure to environmental toxins and metals (such as aluminum) can all help support healthy cognition and memory.