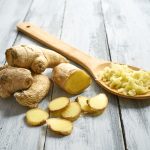 (NaturalHealth365)  The clean, spicy taste of ginger root adds a lively, refreshing note to sauces, soups, and salads.  But this versatile herb – botanically known as Zingiber officinale – has a lot more to offer than merely an intriguing flavor.  A staple of the ancient Ayurvedic and Traditional Chinese healing systems, ginger has been advised for centuries to address nausea, joint pain, and a host of other ailments.

Now, scientists are getting “on board” with the beneficial effects of ginger.  In a 2020 review study published in the scientific journal Nutrients, researchers credited constituents in ginger with anti-inflammatory, antioxidant, and therapeutic properties.  Let’s look at some of the ways in which soothing, refreshing ginger supports modern-day health and well-being.

The queasy, dizzy “green-around-the-gills” sensation of being carsick or seasick can threaten to spoil even the most idyllic road trip or ocean cruise.  Fortunately, some scientists believe that ginger can quell motion sickness even more effectively than pharmaceutical anti-nausea drugs – and achieve this without causing toxic side effects.  What’s the secret?  Ginger appears to quicken the speed at which the stomach empties, which may help decrease nausea, stomach discomfort, and bloating.

Multiple reviews and studies have suggested that ginger may help with nausea resulting from chemotherapy (which affects up to 75 percent of all chemo patients).  Ginger may help reduce nausea following surgical procedures, as well.  Finally, a full 80 percent of pregnant women report experiencing morning sickness, especially in the first and second trimesters.

Here, again, ginger may help.  In one review involving over 1,200 pregnant volunteers and published in Nutrition Journal, dosages of one gram to one-and-a-half grams of ginger significantly reduced nausea.  (Caution: pregnant women with vaginal bleeding and/or clotting disorders, who have had miscarriages, or who are close to giving birth should avoid ginger.  Consult your obstetrician before using ginger for morning sickness).

The main bioactive components in ginger – gingerols, and shogaols – are “key players” in its anti-inflammatory properties.  Both compounds have been shown to inhibit pro-inflammatory substances in the body, via the COX and LOX pathways.  And, for good measure, ginger’s constituents also interfere with the action of xanthine oxidase, an enzyme involved in creating destructive free radicals.  In plain English, this means that ginger can promote the health of body systems, such as the circulatory and musculoskeletal systems.

Some scientists maintain that ginger may even help soothe occasional soreness caused by overwork or strenuous exercise.  For example, in one older (but still influential) controlled study, volunteers performed eccentric actions of the elbow flexors to induce pain and inflammation.  The researchers found that daily supplementation with two grams of ginger resulted in “moderate-to-large” reductions in muscle pain, leading the team to call ginger “effective” for this purpose.

So, if you’ve ever overdone things in your fitness routine or day-to-day activities, it could help to reach for the ginger.  By the way, ginger may also help soothe routine menstrual cramps.

With the relentless demands on our time and attention exerted by the modern world, it’s no surprise that many of us experience occasional bouts of impaired concentration, sluggish thinking, and mental fatigue – a state commonly known as “brain fog.”  Ginger could be just the thing to lift the “fog” and help restore clear thinking.  It appears that ginger inhibits the production of acetylcholinesterase, an enzyme that breaks down acetylcholine (a neurotransmitter, or chemical messenger, crucial to learning and memory).

While more research is needed, one clinical study showed that ginger enhanced attention and cognitive processing in middle-aged women.  And, in an animal study published in the Journal of Nutritional Biochemistry, scientists concluded that dried ginger improved novel objection recognition and enhanced memory. If you feel your concentration and attention are flagging, a revivifying cup of ginger tea could certainly be worth a try.

Use ginger root fresh or dried

Fresh ginger root (technically not the root, but the rhizome – or underground stem – of the ginger plant) can be washed, peeled, then chopped, sliced, or grated for use in recipes or beverages.  You can make ginger tea by washing, peeling, and thinly slicing an inch or two of the fresh root, then steeping for ten minutes in hot water.  Strain, allow to cool, and enjoy – taking small, slow sips.  Natural healers advise drinking up to four cups a day.

When eaten in the amounts usually found in food, ginger is generally considered safe.  Consuming excessive amounts, however, could cause heartburn in some individuals.

Dried, powdered ginger is available in convenient capsule form. Natural healers typically advise amounts ranging from 1,000 mg to 2,000 mg a day, taken in divided doses. Of course, we suggest you get the “go-ahead” from a trusted integrative healthcare provider before supplementing with ginger.

Bottom line: whether you’re looking for a quick mental “re-set” from brain fog, a drug-free boost of energy or natural relief from upset stomach and nausea, versatile ginger just might be the herbal “superhero” you need.

(NaturalHealth365)  I’ll begin this article by stating the obvious: I am not END_OF_DOCUMENT_TOKEN_TO_BE_REPLACED