Exposure RISK: This “Smart” water meter is linked to high levels of radiation 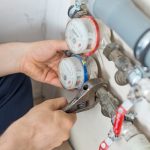 (NaturalHealth365) There’s nothing that “smart” about this water meter.  Smart water meter technology was launched a decade ago and touted as a way for consumers to cut down on their energy usage, lower their bills, and lessen their environmental impact.

Tens of millions of smart water meters have been installed around the world (34.8 million more are scheduled to be shipped and installed in 2021), but the technology has proven to be unsafe – emitting high levels of pulsed radiation (electrosmog), causing fires and explosions, and increasing cybersecurity risks.

But that’s not all!  It’s bad enough that “smart grid technology” poses a risk to consumer health, but it’s even worse when the consumer is footing the bill and the technology isn’t as environmentally meaningful as promised. Typically, companies pass on the cost of repair and replacement of smart water meters to consumers, and their short life span (5 to 7 years) make them a financial stress to households around the world.

On top of that, reports indicate than smart water meters only reduce energy usage by roughly 2%.

WARNING: The unseen dangers of a smart water meter

Or to put it another way: smart meters emit as many as 14,000 short bursts of intensive microwave radiation a day, bursts that not only have the capability to disrupt our cellular chemistry, but also the cellular activity of our pets, as well as wildlife and insects.

While most consumer cases haven’t been proven or validated, in 2017, a French court ruled against utility smart meters and ordered the removal of LINKY electrical smart meters from 13 homes, for medical reasons. In recent years, several cities in California have appealed the installation of smart meters, and the dangers of proposed smart meter rollout continues to be contested in Iowa.

Currently, there is no world consensus on the degree of risk arising from smart meters and electrosmog. At the same time, utility companies do not have a legal base to force a smart meter on a consumer’s home. It’s your choice whether or not you want one installed.

New information is continually being published about the plausible risks of intensive, pulsed microwave smart metering. In order to stay safe, you need to stay informed.

Finally, if you’re concerned about electrosmog, consider purchasing an EMF detector. It’s a critical tool that will help you identify and locate EMF and minimize your exposure.

(NaturalHealth365)  As Big Pharma rolls out one COVID booster after another, a END_OF_DOCUMENT_TOKEN_TO_BE_REPLACED

(NaturalHealth365)  According to the American Cancer Society, “There is no information that END_OF_DOCUMENT_TOKEN_TO_BE_REPLACED