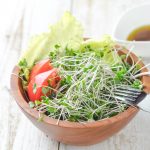 (NaturalHealth365) Type 2 diabetes, which occurs when the body’s supply of insulin is insufficient to control blood sugar, affects over 30 million Americans. In addition to raising the risk of heart disease and stroke, type 2 diabetes can cause nerve damage and kidney disease.  And, while Western medicine attempts to control diabetes with medications such as metformin, these can cause toxic side effects, including kidney damage. Clearly, there is a pressing need for safer treatments – and research shows that broccoli sprouts just might fill the bill.

As it turns out, these slender little sprouts may even help fight the disease at the genetic level – a truly exciting development. Let’s take a look at an innovative new study showcasing the effects of broccoli sprouts against diabetes.

Despite their small size and unremarkable appearance, broccoli sprouts are true heavyweights when it comes to their content of sulphoraphane – a powerful antioxidant and anti-inflammatory plant compound found in cruciferous vegetables. When it comes to glucoraphanin – which is a vital precursor to sulphoraphane – broccoli sprouts contain 10 to 100 times more than their larger counterparts, including cabbage, kale, mature broccoli flowerets and Brussels sprouts.

Because of their rich sulphoraphane content, broccoli sprouts are currently being evaluated by researchers for their potential against nonalcoholic fatty liver disease, autoimmune disease, autism and cancer – particularly of the breast, bladder, prostate and lungs. Incidentally, sulphoraphane even inhibits the growth of H. pylori bacteria, a common culprit in stomach ulcers.

And, of course, a growing body of research supports the use of broccoli sprouts against diabetes. In fact, these little greens have shown so much promise against type 2 diabetes that many forward-thinking integrative doctors currently consider them supplementary treatments.

In a study conducted at the Lund University Diabetes Center in Sweden, scientists first created a “genetic signature” for type 2 diabetes, involving 50 different genes associated with the disease. They then compared this with the gene signatures for various compounds, hoping for one that could counteract the effects of diabetes.

The most promising of all the candidates was sulphoraphane, which researchers said altered the expression of certain liver genes in a way that could benefit type 2 diabetes.  In earlier studies, sulphoraphane had been shown to reduce amounts of glucose (blood sugar) produced by liver cells.

In addition, animal studies revealed that it was also able to improve both glucose tolerance and the expression of genes associated with type 2 diabetes.  To conduct the latest study, which was published in Science Translational Medicine, 97 participants with type 2 diabetes were given either a placebo or a broccoli sprout extract for 12 weeks.

According to study leader Dr. Annika Axelsson, sulphoraphane led to “significant improvements” in fasting glucose levels, when used by obese participants with poorly controlled blood sugar.  In other words, the compound did not reduce fasting glucose in patients whose diabetes was well controlled.

While this study was the first to explore the genetic signature of sulphoraphane, it built upon previous research on the effects of broccoli sprouts against diabetes.

In a 2013 review published in Journal of Medicinal Foods, the authors reported that sulphoraphane increases antioxidant response while inactivating pro-inflammatory molecules, such as NF-kB and C-reactive protein. This means it can strike at the heart of the oxidative stress and inflammation that trigger diabetes.

They also credited sulphoraphane with the ability to combat dangerous complications from diabetes, stating that it “could prevent nephropathy (kidney damage), diabetes-induced fibrosis (scarring) and vascular complications.”

As if this weren’t enough, sulphoraphane from broccoli sprouts helps to lower triglycerides (fats) in the blood and reduce harmful LDL cholesterol, potentially allowing it to help prevent the heart disease that can result from type 2 diabetes.

Improve your mood with this nutrient-packed “superfood”

High in fiber, low in calories and packed with antioxidant vitamins C and A, broccoli sprouts also supply calcium and iron.  Use broccoli sprouts to add texture and flavor to salads. Or you can layer them into sandwiches – or serve them on the side as a refreshing accent to cooked dishes.

For maximum benefit, broccoli sprouts should be eaten uncooked, and chewed thoroughly. The act of chewing releases myrosinase, a compound needed to unleash beneficial sulphoraphane.

As an added benefit: eating broccoli sprouts may even help your mood.  Sulphoraphane has been shown in studies to reduce glutamate, an amino acid which has been linked to depression and other mental health issues.

Broccoli sprouts are generally available at health food stores, and at some supermarkets. If they are hard to come by, no problem: you can sprout your own. You can get information on “DIY” broccoli sprouts here.

Finally, broccoli sprouts are available as an extract.

Other helpful supplements for type 2 diabetes include ginseng, cinnamon and bitter melon.  In addition, there is strong evidence that alpha lipoic acid (ALA) supplements can improve insulin resistance and reduce the pain of neuropathy.

Typically, ALA dosages are 600 mg a day, but – as always – consult your integrative doctor before supplementing with these natural nutrients for type 2 diabetes.  Naturally, proper nutrition plays an important role in the control of type 2 diabetes, as well.