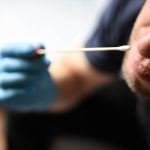 (NaturalHealth365)  One of the major stipulations of the White House’s federal COVID mandate – a sweeping and unconstitutional demand that the president formally claimed he never would impose on Americans, and one with which he insists businesses comply even though a federal court recently blocked the mandate until further notice – is that employees who don’t get the COVID shot must undergo weekly testing.

But while many say routine testing is a reasonable accommodation for people who decline the mRNA injection, others are raising concern over the safety of these tests.

In late October, a Cyprus-based union group named Isotita (Equality) called for the suspension of a COVID rapid test after it was found that both PCR and rapid test nasal swabs contained trace amounts of a “toxic and hazardous” substance called ethylene oxide.

Ethylene oxide is a liquefied gas used in the medical industry for decades as a sterilizing agent, especially on heat or moisture intolerant supplies.  Ethylene oxide has been banned by the European Union in food production – although it does allow in some foreign products containing the compound – while other countries use it to combat bacteria, fungi, and other microorganisms.

In fact, this past summer, the European Commission issued a statement reiterating that law (General Food Law COM 178/2002) stipulates that ethylene oxide has “no safe level of exposure for consumers,” and that “any level consumers may be exposed to, presents a potential risk.”

On its Safety Data Sheet – which you can find with a quick Google search or on the Occupational Health and Safety Administration’s website – ethylene oxide is classified as a “toxic and hazardous substance” that has been linked to a wide range of health problems in both animals and humans, including:

Even more problems:  Millions of home tests recently recalled for this insane reason

Beyond the concerns of repeatedly exposing someone to ethylene oxide – and who knows how long these mandatory COVID tests will remain in effect – many of these COVID tests are rife with other problems.

On October 5, the U.S. Food and Drug Administration (FDA) issued a Class I recall of more than 2 million COVID-19 home tests – manufactured between February 24 to August 11 and distributed from April 13 to August 26 – from a company named Ellume, due to the tests’ alarming rates of false-positive test results.

A false positive means that a test suggests a person is infected with the virus that causes COVID-19 even though they do not actually have it.

The FDA defines a Class I recall as “a situation in which there is a reasonable probability that the use of or exposure to a violative product will cause serious adverse health consequences or death.”

We remember, of course, that COVID tests are being used to determine who can continue working, who can access public and private spaces, who can travel, when and whether lockdowns can be issued, and more.  To think that an unknown number of individuals are suffering the consequences of false positives only adds to the damaging effects of this pandemic.

(NaturalHealth365)  First, it was menstrual problems, and now, it’s current and future END_OF_DOCUMENT_TOKEN_TO_BE_REPLACED