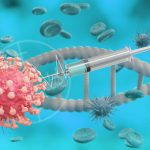 (NaturalHealth365)  Throughout the past two years, people have been shadowbanned, de-platformed, and shamed for describing the Pfizer, and Moderna mRNA COVID shot as “gene therapy.” It seems that almost any and all claims comparing these shots to gene therapy have been swiftly “fact-checked” by Pharma-funded media outlets.

An example: in an article posted in August 2021 (and in what reads like an attempt at semantic manipulation and gaslighting), Reuters claims that “while mRNA vaccines can be considered ‘genetic-based therapy’ because they use genetic code from COVID-19, they are not technically gene therapy.  This is because the mRNA does not change the body’s genetic makeup.”

“mRNA does not change the body’s genetic makeup.” Is this true?  A new study calls this claim into question.

The peer-reviewed, open-access study was published in the January 2022 volume of Current Issues in Molecular Biology.  In it, a team of Swedish authors was able to demonstrate in a laboratory experiment that mRNA found within COVID jabs gets into cells and “is reverse transcribed intracellularly into DNA in as fast as [6 hours] upon BNT162b2 exposure.” (BNT162b2 is the research name of Pfizer’s mRNA COVID shot.)

The researchers also found that there is a “fast up-take” of Pfizer’s mRNA injection “into human liver cell line Huh7, leading to changes in LINE-1 expression and distribution.” According to a 2018 article published in Mobile DNA, LINE-1, or Long Interspersed Nuclear Element-1, is a genetic component that uses RNA to create “new genomic insertions via a ‘copy and paste’ mechanism known as retrotransposition.” Importantly, LINE-1 makes up approximately 17% of the human genome.

Based on their findings, the researchers call for further investigation into “the effect of BNT162b2 on other cell types and tissues.”

Why are officials trying so hard to pretend that mRNA COVID shots aren’t gene therapy?

Perhaps it’s not surprising to hear that we now have evidence showing that these mRNA COVID shots can alter human DNA.

For one thing, altering human genes is the explicitly stated goal of gene therapy itself.  On a webpage called “What is gene therapy?” (last updated March 1, 2022), the U.S. National Library of Medicine writes: “Gene therapy is a medical approach that treats or prevents disease by correcting the underlying genetic problem.  Gene therapy techniques allow doctors to treat a disorder by altering a person’s genetic makeup instead of using drugs or surgery” (emphasis ours).

For another thing, previous research has shown that RNA from SARS-CoV-2, the virus that supposedly causes COVID-19, can also “be reverse-transcribed and integrated into the genome of human cells,” as the Swedish authors write.  And if the COVID virus can do it, is it that much of a stretch to postulate that the COVID injection can do it, too – an injection that was purposefully designed to mimic the effect of SARS-CoV-2 in the body?

The “problem” with new evidence like this, of course, is that it means millions upon millions of people throughout the globe have been submitting themselves to gene therapy without informed consent for more than a year now – no informed consent, because we have instead been told that these drugs are not gene therapy at all.

In closing, ask yourself these two questions:

(NaturalHealth365)  The telecommunications industry has rolled out 5G connectivity quite inconspicuously.  The END_OF_DOCUMENT_TOKEN_TO_BE_REPLACED