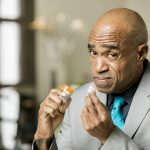 (NaturalHealth365) Osteoarthritis, a chronic, painful joint condition, currently affects over 32 million adults in the United States – and the number of hip and knee replacements, or arthroscopies, has surged as a result.  The Mayo Clinic has reported that 4.7 million Americans have undergone total knee replacements to date, while another 2.5 million have had hip replacements.  In fact, degenerative conditions such as osteoarthritis, tendinitis and bursitis are so common in the aging U.S. population that doctors refer to these diseases collectively as “boomer-itis.”

To address post-surgical pain and anxiety, Western medicine often prescribes opioid medications, such as hydrocodone or oxycodone. But – as the opioid epidemic tragically demonstrates – these drugs can be highly addictive, with research showing that their use is linked to longer hospital stays, higher costs and increased mortality.

A new study presented just this month shows that post-surgical acupuncture could reduce the need for these dangerous narcotic medications and pave the way to a speedier, safer recovery.

On October 5, at the annual meeting of the American Society of Anesthesiologists in Chicago, researchers reported the effects of traditional acupuncture on military veterans who had undergone hip replacement surgery.

Traditional acupuncture, an ancient technique used in Chinese medicine, involves the use of very thin needles inserted through the skin at key “trigger points.”  Proponents say this helps to relieve pain by balancing the flow of energy, or chi, that flows through various pathways (meridians) in the body.

Participants who received traditional acupuncture reduced their need for opiate medication by a stunning two thirds, when compared to those who did not receive acupuncture.

And, that wasn’t all.

24 hours after the surgery, the acupuncture group reported less anxiety, along with higher satisfaction with their pain management.

In a second arm of the study, the team used a specific technique known as “battlefield acupuncture.” This type of acupuncture, which involves placing needles on ear acupoints, was adapted in 2001 by a U.S. Air Force doctor to provide quick pain relief on the battlefield.

The researchers found that veterans who received battlefield acupuncture reported lower pain scores, and required only half as many opioids as the control group.

In addition, past research has supported the ability of acupuncture to decrease anxiety and promote relaxation in patients with painful conditions.

In 2006, the world-renowned Mayo Clinic conducted a randomized, placebo-controlled study involving 50 patients with fibromyalgia – a condition which can feature chronic joint pain, stiffness, fatigue and sleep disturbances.  The results, published in Mayo Clinic Proceedings, revealed that patients who received acupuncture experienced significantly less fatigue and anxiety when compared to the control group.

The study’s lead author noted that these results made it clear that there is more to acupuncture than a mere “placebo” effect – and acknowledged it as a complementary medical technique that is helpful for patients.

While many patients experience good results from knee replacement surgery, the fact is: one out of seven patients continue to experience severe pain a few years after the procedure.

In addition, the procedure can be costly.  In a British study involving 90 patients with severe knee osteoarthritis and published in BMJ, the researchers found that acupuncture can relieve pain and even offer a low-cost alternative to surgery.

Two clinics run by trained acupuncture nurses were established to see if the technique was a viable alternative to surgery.  The patients – who reported symptoms such as constant pain and the inability to walk far – were given acupuncture weekly for a month, followed by a session every six weeks for two years.

As early as a month into the study, researchers found clinically significant improvements in pain control, stiffness and functional capacity – and participants continued to improve throughout the two-year monitoring period.

The upshot was: acupuncture provided long-term symptom relief in about a third of the patients, sparing them the need for surgery and leading the team to endorse acupuncture as a “cost-saving alternative” that could save the National Health Service roughly 100,000 British pounds (around $130,000) a year.

Experts note that low-impact exercise programs – particularly walking – may hold the key to avoiding “boomer-itis.”  Biking, treadmill walking, swimming and daily stretching are other activities that can help strengthen muscles while avoiding injury.

And, taking off excess pounds can also help to reduce the burden – and pain – on arthritic hips and knees.  Of course, work with your trusted integrative doctor or physical therapist to develop a weight loss and exercise routine that is right for you.

If you would like to try acupuncture to relieve osteoarthritis pain, seek out an experienced, certified practitioner endorsed by the National Certification Commission for Acupuncture and Oriental Medicine.

Natural healers and conventionally-trained physicians alike warn of the potential dangers of opioid pain medications.  It’s good to know that the natural technique of post-surgical acupuncture can help lessen the need for drugs – and possibly help you avoid arthroscopic surgery entirely.

(NaturalHealth365)  Acupuncture is a centuries-old remedy that was first used in China.  END_OF_DOCUMENT_TOKEN_TO_BE_REPLACED

(NaturalHealth365)  How many vibrant green superfoods do you consume daily?  If it’s END_OF_DOCUMENT_TOKEN_TO_BE_REPLACED

(NaturalHealth365)  For many people, eating cranberries is a sort of “one-off.”  A END_OF_DOCUMENT_TOKEN_TO_BE_REPLACED