Slash your risk of cognitive decline with this simple dietary intervention 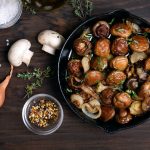 (NaturalHealth365) Mushrooms are prized by chefs for their meaty, smoky taste – and their ability to enhance recipes with the savory, rich quality known as “umami.”  Nutritionists say mushrooms’ ability to evoke umami is due to their high content of an amino acid known as glutamate, which is also responsible for much of the flavor in meats, cheeses, simmering soups, and fish.

But, there is a lot more to these edible fungi than their umami.  In a recent cross-sectional, community-based Chinese study, researchers discovered that eating mushrooms can help reduce the risk of cognitive decline by slashing the odds of developing mild cognitive impairment (MCI), which affects 15 to 20 percent of people aged 65 and older.  Let’s take a closer look at the groundbreaking study and the remarkable benefits of mushrooms.

Warning: MCI is often a precursor to an even more severe and deadly disease

Unlike more serious forms of dementia, MCI is not disabling, and people with the condition can still carry out normal daily activities.  However, the affected person is usually aware of a decline in cognitive abilities, which is often observed by family members and close friends as well.  While not all people with MCI go on to develop Alzheimer’s disease, the Alzheimer’s Association reports that MCI increases the risk.  In fact, many physicians view MCI as a transition between the decline of normal aging and the more serious impairments of dementia.

In a six-year study involving over 600 adults over 60 and published in the highly regarded Journal of Alzheimer’s Disease, a team from the Departments of Psychological Medicine and Biochemistry at the Yong Loo Lin School of Medicine at the National University of Singapore investigated the effects of mushroom consumption on cognition.  The scientists were careful to adjust for other factors that can influence MCI, including age, gender, education, cigarette smoking, alcohol consumption, hypertension, diabetes, heart disease, physical activities, and social life.

The study results were eye-opening.

The team found that older adults who consumed more than two portions of mushrooms a week reduced their odds of mild cognitive impairment by an astonishing 50 percent. (A portion was defined as about three-quarters of a cup of cooked mushrooms).  Intriguingly, even smaller amounts of mushrooms – such as a single weekly serving – conferred benefits as well.

By the way, the researchers found that it didn’t seem to matter which type of mushrooms were consumed.  Golden, oyster, shiitake, and white “button” mushrooms – as well as assorted canned and dried varieties – all appeared to have the same effect.

Researchers: Cognitive benefits of mushrooms may be due to unique compound

Researchers credited ergothioneine, an antioxidant and anti-inflammatory compound found in mushrooms, for the beneficial cognitive effects.  In fact, the study was inspired by earlier research showing that ergothioneine deficiency could be a risk factor for neurodegenerative diseases.

And ergothioneine isn’t the only beneficial compound found in mushrooms.  Scientists say that other constituents – including such tongue-twisting substances as hericenones, erinacines, scabronines, and dictyophorines – may help cut odds of cognitive impairment as well.  And, another key to mushrooms’ ability to cause plunging odds of MCI is their choline content, an essential nutrient vital to learning and memory.

The team noted that further studies on the cognitive benefits of mushrooms would include randomized, controlled trials on ergothioneine.  Trials are also ongoing to explore the effects of other neuroprotective nutrients, include L-theanine and catechins from tea leaves.

Mushrooms are rich in protein, vitamins, minerals, fiber, and disease-fighting polyphenols and carotenoids – yet low in calories and fat.  They also contain potent antioxidants – including immune-boosting vitamin C and the mineral selenium – and B vitamins, such as folate, riboflavin, thiamin, and vitamin B12.  (Since vitamin B12 is found almost exclusively in animal products, this makes mushrooms a particularly valuable addition to the diets of vegans and vegetarians).

In addition, mushrooms are the only vegan, non-fortified source of vitamin D on the planet – although the content may vary depending on how much light is used in the growing process.  Some producers expose mushrooms to ultraviolet light to enhance vitamin D levels – and often feature this fact on the label.  The minerals copper, iron, potassium, and phosphorous are also found in mushrooms.

In addition to their beneficial micronutrients, mushrooms contain up to a gram of dietary fiber per cup.  Coupled with their satisfying, chewy consistency, the fiber in mushrooms may help create a sense of satiety or fullness that can help protect against binge eating and food cravings.

And, at a minimal 20 calories per cup – about a quarter of the calories in a small apple – mushrooms won’t break the daily caloric “bank.”

Incidentally, in addition to protecting against cognitive decline, the benefits of mushrooms include cardioprotective and cancer-fighting properties.  According to researchers at Harvard T.H. Chan School of Public Health, beta-glucans in mushrooms may help to lower harmful LDL cholesterol.  The scientists also credit mushrooms with stimulating the activity of immune cells and macrophages that can stop the spread of tumor cells.

Mushrooms have long been used for both culinary and therapeutic purposes, with medicinal mushrooms revered as a staple of Traditional Chinese Medicine.  But, the Singapore study suggests that a mere two servings a week of ordinary, garden-variety mushrooms might be stronger “medicine” than anyone ever suspected.

(NaturalHealth365)  More than 4,500 published studies have created a powerful body of END_OF_DOCUMENT_TOKEN_TO_BE_REPLACED