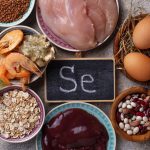 (NaturalHealth365) North Americans are famously deficient in a number of vitamins and minerals, including vitamin D, magnesium, omega-3 fatty acids, iron, and B vitamins.  Fortunately, selenium deficiency is relatively rare in the United States, although an estimated 1 billion people throughout the world are lacking in this important nutrient.

In today’s nutritional round-up, we discuss the notable health benefits of selenium, what can happen if you don’t get enough of it, where you can source it from whole foods, and how much selenium you need for optimal health.

According to the National Institutes of Health (NIH), selenium is a trace mineral that comes in both organic and inorganic forms.  Both forms are considered good dietary sources, although once inside the body selenium is typically found in the organic form selenomethionine.

Selenium is “essential.”  This means our bodies can’t make selenium, so we must get it from our diets.  And even though you don’t need large amounts of selenium on a daily basis, the health benefits of this nutrient are impressive.  Here are four possible benefits shown in the research:

In addition, the NIH reports that selenium is involved in DNA synthesis and thyroid hormone metabolism.  This mineral also protects against oxidative stress and infection, thanks to its powerful antioxidant capacity.

To reiterate, selenium deficiency is considered rare in the U.S., although certain people, including individuals living with chronic health conditions like HIV or kidney disease, may be more likely to have insufficient amounts.  The impact of selenium deficiency can be significant, however.  Even a moderate deficiency increases the risk of infertility and prostate cancer in men along with neurological diseases, anxiety, and depression.

Are you getting enough selenium? These are the top dietary sources

The typical adult needs 55 micrograms (mcg) of selenium daily, according to the NIH.  But before worrying about whether you should add a supplement to your routine, consider eating more foods that are known to be rich sources of this trace mineral.  Top of mind (or top of menu) include:

Just remember to buy organic – whenever possible – to avoid the unwanted consumption of chemicals.

Generally speaking, it’s unlikely you’ll need to take a selenium supplement, but if you have concerns or are diagnosed with a chronic health condition, be sure to ask your integrative doctor about the right supplement routine for your health needs.

(NaturalHealth365)  Every 34 seconds in the United States, somebody dies of heart END_OF_DOCUMENT_TOKEN_TO_BE_REPLACED

(NaturalHealth365)  More Americans are dieting than ever before.  Almost half of Americans END_OF_DOCUMENT_TOKEN_TO_BE_REPLACED