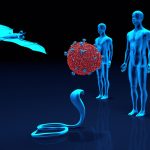 (NaturalHealth365)  As Big Pharma and U.S. public officials continue to push for widespread injection of the new COVID shot, more alarming evidence is coming out about the origins and backstory to this pandemic disease.

Thanks to an unnamed whistleblower, Drastic Research has revealed evidence that scientists at the Wuhan Institute of Virology (WIV), in collaboration with US-based non-governmental organization EcoHealth Alliance (EHA), “attempted to carry out advanced and dangerous human pathogenicity Bat Coronavirus research that would clearly qualify as Gain of Function (GoF).”

The evidence comes from a 2018 grant proposal submitted to the Defense Advanced Research Projects Agency (DARPA).  The grant allegedly shows that EHA president Peter Daszak – who in April 2020 secretly thanked Dr. Anthony Fauci for downplaying the lab leak theory of SARS-CoV-2, before there was any evidence to prove a lab leak wasn’t possible – and his team planned to inject genetically engineered nanoparticles containing “novel chimeric spike proteins” into wild cave bats in Yunnan, China.

The goal?  According to the documents, to study how to prevent coronavirus outbreaks and figure out how to make these coronaviruses more infectious to humans by introducing “human-specific cleavage sites” to bat coronaviruses.

The grant proposal (called The DEFUSE Project) asked for a whopping $14 million to fund its research.  While DARPA rejected total funding due to the understandable concerns of gain of function research and its implications on making coronaviruses more dangerous to humans, partial funding in the future was still left on the table.

Indeed, the Drastic Research team has publicly questioned whether the research went ahead anyway, given the hypothetical scenario of a SARS-CoV-2 lab leak.

In a September 22 New York Post article, Drastic Research states: “Given that we find in this proposal a discussion of the planned introduction of human-specific cleavage sites, a review by the wider scientific community of the plausibility of artificial insertion is warranted.”

Collaboration between U.S.-based and Wuhan-based scientists is “staggering,” according to leaked documents – will we ever know the truth about COVID-19 origins?

According to the Drastic Research team, the newly leaked grant proposal “shows a staggering level of deep involvement of EcoHealth Alliance with the Wuhan Institute of Virology, on matters of national interest.”

They allege that the DARPA grant proposed to “pay a good chunk of key WIV researchers salaries” and that some scientists involved in the bat virus research “should be invited to DARPA headquarters in Arlington.  All the while without proper risk assessment and considerations for ethical and social issues and incorrect evaluation of what constitutes [gain of function] research.”

In case you were wondering, Drastic Research, which stands for D.R.A.S.T.I.C. (Decentralised Radical Autonomous Search Teams Investigating Covid-19 – is a digital collaboration of global scientists investigating the origins of the COVID-19 outbreak.

(NaturalHealth365)  According to the American Cancer Society, “There is no information that END_OF_DOCUMENT_TOKEN_TO_BE_REPLACED